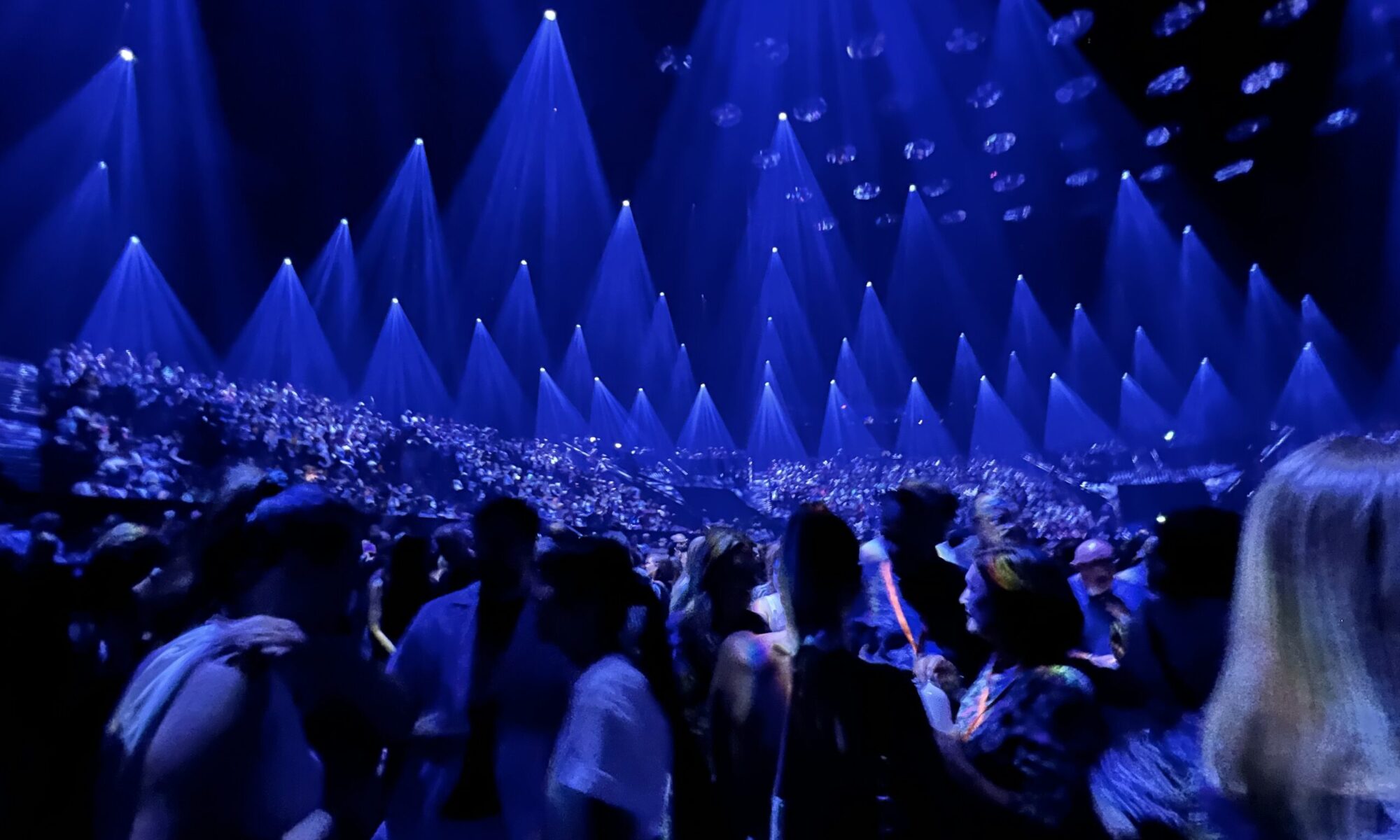 Would you pay for pricey concert tickets to see digital avatars perform? Prices on par with seeing a legendary band?

I would have said no.

But then we saw ABBA featured on CBS Sunday Morning – one of our favorite TV programs – and were intrigued by the allegedly stupendous cutting-edge technology the band was using to create a concert experience from their heyday.

Well, the price is so worth it.

The $175 million “purpose built” ABBA Arena in Queen Elizabeth Olympic Park in London opened in May and holds 3,000. The arena alone – modern, wide open and bright and earthy with an array of food, drink and merch offerings – is spectacular. The stage, lighting, video screens and floating videos overhead, lasers and other moving parts, as well as a fantastic 10-piece live band, 291 speakers, and occasional animation – was stunning. You’re led to it through different futuristic-lighted descending halls that literally set the stage

I am not exaggerating. I actually got emotional at a few points. And I was not alone.

The sold-out audience – of all ages – went wild, swaying, singing and dancing. The youngest knew every single word and were practically ecstatic. It was a very joyful experience.

The arena is split between rising seating and the floor area, which is for dancing. We opted for the dance floor and we moved about, seeing the four from all angles. They were absolutely realistic. They had full depth, sparkle, expressions. They were like no video game animation we’ve seen.

Apparently, the band members performed in motion capture suits for five weeks, with 160 cameras scanning their body movements and facial expressions to create the illusion. Reportedly, the Royal Ballet choreographer helped the four – now in their 70s – recreate their movements.  Then 1,000 animators and visual effects artists created the “ABBAtars” at their height of fame.

These are not 3D holograms. They are on a 65-million-pixel screen with tremendous concert effects. Truly, I’m not sure we’ve seen such effects and we’ve seen many of the greats such as McCartney, the Stones, Bowie, Rush, Prince and many more.

Toward the start, “Benny” spoke to the audience, saying, “To be or not to be, that is no longer the question.  This is the real me. I just look very good for my age.”

The show is currently due to run until December 2022. Then, all kudos to the Swedes, the venue can be collapsed into a flat-pack and taken on the road. I truly hope it comes to the U.S.

Prior to this, we had no hope of ever seeing the band. They turned down $1 billion to play millennium shows. ONE BILLION DOLLARS.

But the new technology, pioneered by Star Wars and Marvel films’ VFX company Industrial Light & Magic, lured them back.

We always make a point of seeing a show when we visit London, which has been quite a few times. London’s West End is wonderful. And we might have said Hamilton, We Will Rock You, or The Jerry Springer Opera were our favorites.

The ABBA Arena is not convenient from city center, but it is absolutely fabulous. It’s the closest I think we’ll come to time travel – stepping back 45 years and witnessing firsthand ABBA’s incredibly unique songs, singing and harmonies, beauty and fashion.

At the end, after Dancing Queen and The Winner Takes It All, the four exit and you think it’s over. But then the four ABBAtars at their current age come out and acknowledge the audience and embrace each other.

I’m not ashamed to say that I was with the rest of the crowd in cheering my heart out.

NOTES: There are NO photos or video allowed. We were warned several times, and we saw an usher take someone’s phone and delete photos.

I only wish I’d gotten some pics of the folks who dressed in era clothing for the occasion.