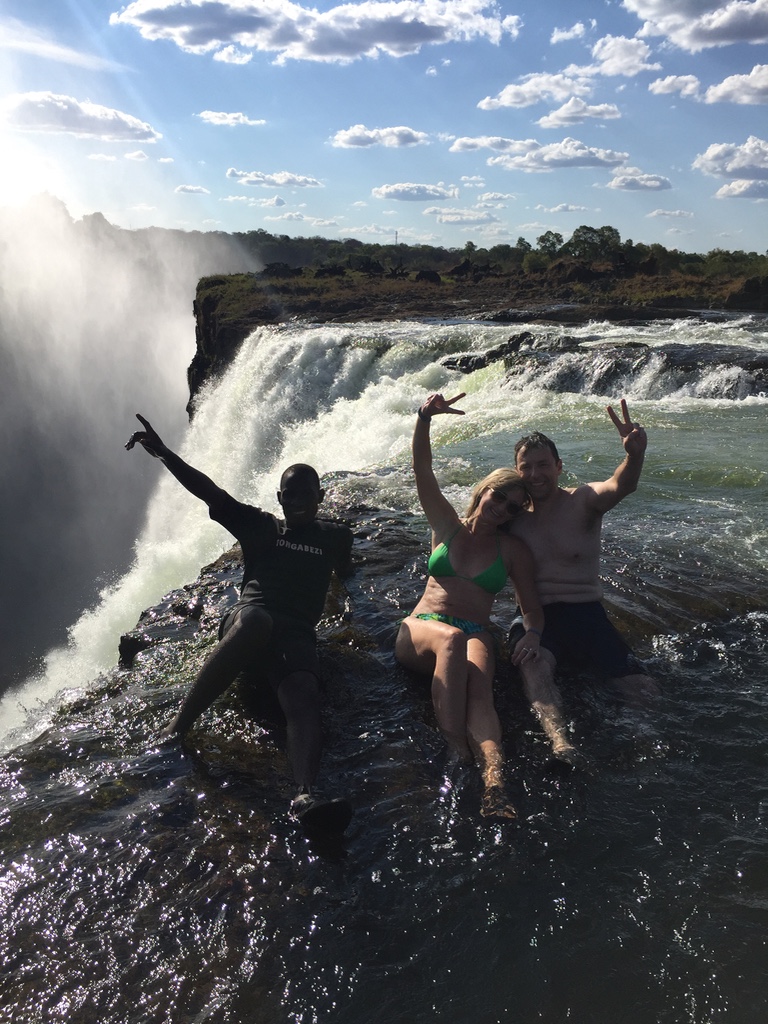 The first thing you need to know if you want to sit on the edge of the world’s largest waterfall is that you must go in dry season, between September and December.

Victoria Falls, on the border of Zambia and Zimbabwe, is the world’s largest sheet of falling water, almost double the height of Niagara Falls and nearly 2,000 feet wider.

It’s also one of the Seven Natural Wonders of the World and the major waterfall on the Zambezi River. The African people who live around the falls call it Mosi-oa-Tunya, which means “smoke that thunders.” The spray is so intense, it actually looks like smoke. And it does thunder.

In dry season, the water recedes enough to allow you access to Livingstone Island and the Devil’s Pool at the literal edge of the waterfall.

It’s no simple task to get there. People plan ahead, which we didn’t know.

From the hotel, we climbed into a small boat and made our way down the river. We docked to a small rocky island and began our hike. When we reached more water, we swam, then hiked some more, then swam some more.

Finally, we hiked a last little bit before the rough steps to the pool were revealed. The Devil’s Pool is a natural stone basin revealed only in dry season between a rocky outcrop and the falls. I can’t imagine how anyone first found it. It is literally in the center of the river as it charges over the fall. The swift current can catch you if you venture too far, and it did catch me a bit. That was scary.

We swam to the edge, where our guide helped lift us to sit on the literal brim. He stayed with us for protection. Peering over the side was breathtaking. The spray is almost like a fog, with rainbows arching through. The sound, a roar you could hear at our hotel, is nearly deafening when you are on top of it.

People standing near the Zimbabwe side of the falls who looked like they could see us must have thought we were nuts. Indeed, when we met an English couple later in Zimbabwe, they said they did see people in the pool and thought they were nuts.

After 10 or 15 minutes in the pool, we climbed back out to let someone else have a turn.

We returned the reverse way and enjoyed a nice lunch and beers at a tented area on a small island before boating back to the hotel.

Did I mention how fabulous the Livingstone hotel is? It’s fabulous. The rooms are spacious and well appointed. We enjoyed breakfast on our outdoor patio, where we could hear the hippos in the river, and watch for giraffes and zebras to pass and hear the birds.

Later, we could sit with cocktails at the outdoor bar area and watch the hippos emerge from the water and trumpet. Or we could lounge at the large beautiful pool.

Our fabulous hotel also helped us book a helicopter tour – which we’d highly recommend – to view the falls from above.

That might have been the moment – viewing the Devil’s Pool from above – that we might have thought we actually had been nuts.

3 Replies to “Swimming in the Devil’s Pool: on the edge of Victoria Falls in Zimbabwe”