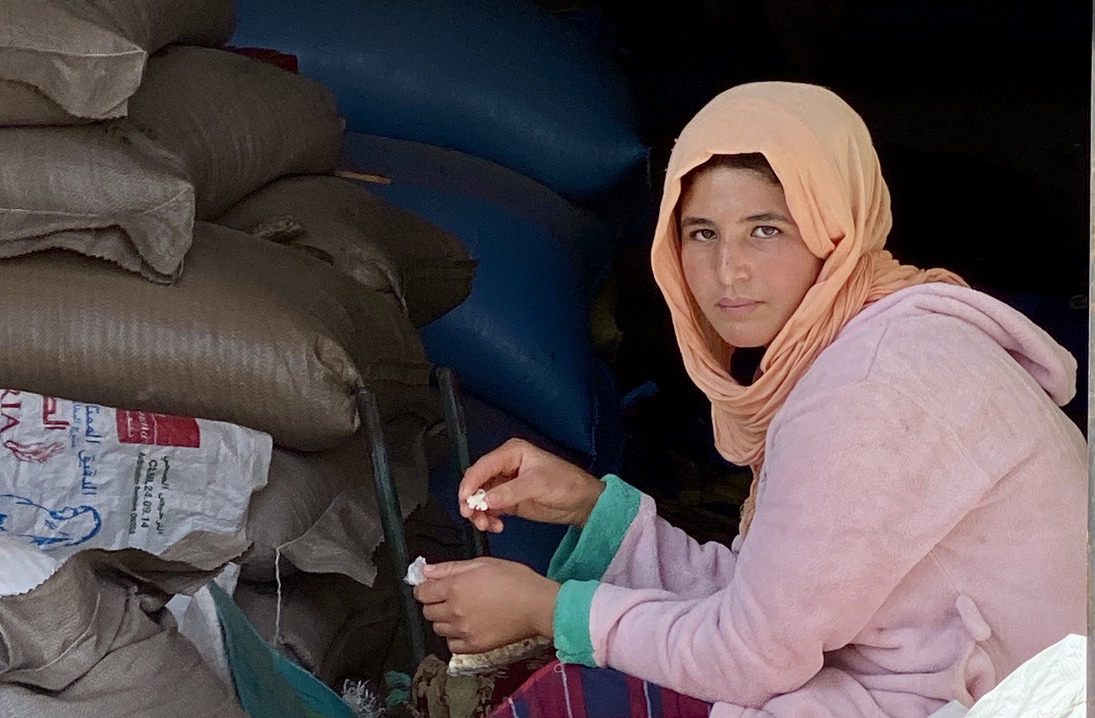 We’ve stopped off the Kingdom of Morocco’s National-8 road, traveling through the Middle Atlas Mountains.

N-8 – alternately paved, dirt, gravel and two, four and ONE lane – is an experience. In some areas, cantaloupe-sized rocks are used like traffic cones and are strewn randomly to restrict traffic, which occasionally includes donkeys and horse carts. We go from seaside to mountains to lush valleys to desert, past miles of olive and argon trees.

We’ve left the N-8 and traveled into the hills. We’re now stopped at a weekly market in a small village, Beni Zrantel, a bustling place people travel to from the surrounding region to sell and buy. Dusty vehicles and donkeys mix.

An older-looking woman missing some front teeth leaves her mint tea booth to come over and say something in Arabic and smile and kiss the side of my face.

“She said you’re beautiful,” our driver Mohamed, or Momo, translates, adding that she’s seen probably only one or two Americans in her life. I hold my hands over my heart and she does the same.

This is the face of Islam we experience in this predominantly Islamic country.

We buy a kilo of lamb and a man chops it up, puts it in a little plastic bag and we carry it to another woman who chops it more and grills it over open flames for us. We sit near our tea lady, who brings us a tray of sugary mint tea, what they call “Moroccan whisky.” They love their sugary mint tea here.

When the lamb is done, it’s presented to us. Momo takes a bit and gives it back to our griller. It’s custom to give back in gratitude, he explains.

And the lamb is delicious beyond words.

As we travel through Morocco in a ring from Casablanca to Rabat to Fez to Marrakech and visit many towns in between, Momo brings us small gifts: Moroccan pastries, fresh juice, fruit, native stones. He insists he buy the lamb – which is delicious and served with the ubiquitous flat round bread.

We’re able to easily call and text with family back home, and my sister worries about our safety, especially because I can’t tell her exactly where we are.

But we’re not worried about our safety.

Morocco claims to be one of the safest countries in the world, much safer than the U.S. by some indexes. We’re told a threat was made a couple of years ago, and security was beefed up more. In the north, we see pairs of police accompanied by army soldiers holding assault rifles on corners and strolling around. We are told not to photograph them.

They’re not messing around. In 2015, Morocco created a bureau monitoring security threats and it claims to have dismantled 13 terrorist cells so far this year here and abroad. It claims to be a world leader in counter terrorism.

As forward as it is in this area, however, it is firmly rooted in its past. The medinas – walled old city areas – are labyrinthine, sinuous mazes. Their gates are magnificent. They’re home to thousands of people.

Most passages are only just wide enough to walk side by side. In some we can reach out our arms and touch each wall. We shrink from loaded burros, motorbikes and carts in these corridors. Some on scooters and bikes seem intent on racing at high speed around us, as if the game is to see how close they can come to knocking us to the cobblestones.

The Fez Médina is preserved as a UNESCO World Heritage site. It’s more than 1,200 years old and it feels like you’ve stepped back into the Middle Ages.

People ply their trades along the passages. Thread makers tack their colorful strands along the passage walls and, standing 20 or so feet away, use fishing reels or small electric motors to twist the strands hundreds of times into thread. Metalworkers clang. Leather craftsmen sew the poof ottomans we buy in the States and make colorful slippers. Residents leave their low doors with the hand of Fatima hinges to take their dough to the baker stoking the communal wood-fired oven.

All of these craftsmen keep Morocco’s past alive. Their work is reflected in the souks, or market areas, of the medinas. It’s a colorful wonderland, and it’s a barterer’s paradise. They’re also what allowed the king to build the world’s third-largest mosque in Casablanca in the 1980s and make it look like it’s spectacularly ancient. The king paid $800 million for it.

These medinas are the only places we experience annoyance with us. They are living and working here, and we’re slowing them down, gawking at everything. “Move,” they say in Arabic.

Small elderly female beggars approach our guide. When he doesn’t respond, they follow him, finally letting out a loud guttural “AAAHH!” They inevitably turn around at that sound and hand over coins.

I interpret this as a cry of, “Your mother would be ashamed of you!”

As in any place that is loaded with tourists, you find plenty of opportunities to be parted with your money. In the famous market square in Marrakech, Adam wants us to get a picture with a cobra. There are groups of men in traditional garb arrayed around the huge square, and many of them have brought snakes, monkeys and other critters for Instagram shots.

Adam has read that you should always negotiate the price for these pictures up front, so he dutifully approaches one of the men with a basket of cobras.

“Will you take 20 for a photo with us?” he asks the bearded man in a long robe running this little menagerie. A fee of 20 Moroccan dirham would be about $2 US.

Adam expects the man to ask for double in reply. So he is surprised when the man thinks for a second, smiles and nods. He takes Adam’s phone and starts snapping a bunch of photos for us, as we kneel on the paving stones and edge as close as we dare to the arching cobra with its flared hood.

We’re excited to see the photos as Adam goes to retrieve his camera from the man. Adam hands over 20 dirham plus and extra 5 just to be nice.

The little photo session has suddenly become 10 times more expensive. Things can get expensive quickly in Marrakech, even if you are on your guard for it.

“No, we agreed to 20 dirham,” Adam replies and the man glowers and seems to be ready to argue.

His demanded fee would not break the bank of course but it’s really annoying to feel like you are being tricked when you were going to be nice and give some extra anyway. Adam frown back at him, pulls out another 100 dirham and holds it out to the man, bringing our total to about $12.

“There, ” Adam says. “We’ll split the difference.” The man takes it, shrugs and turns away.

At a tannery, we’re given bunches of peppermint to cover our noses. The stench is not as bad as on a nearby mountain overlook where they’ve laid their hides out to dry in the hot sun near ruins.

The smells are much much more intoxicating in the spice souks. They say their food is not spicy, that it is well spiced. And it is. The tagines – domed clay casserole-like dishes – of lamb and other meats, couscous or vegetables are so good. The pastilla – a skillet chicken or dove pie – has a thin layer of sugar and cinnamon I never thought would have been so delicious.

Outside of Meknes, we see another UNESCO site, Volubilis, a remarkably intact Roman city from the 1st Century. About half of its 100 acres has been excavated and it’s easy to see the grand roadways and arches, the palaces and palatial homes with large indoor courtyards with fountains and their mosaic floors still almost perfect. It’s one of the best examples of Roman ruins we’ve seen outside of Rome.

As we travel through Morocco, we see vast cemeteries of white stones overlooking many of the cities. Moroccans are permitted to re-claim and re-use a grave after it has been occupied for 47 years. They don’t believe in cremation.

Morocco is a constitutional monarchy, but the king retains broad authority. “God, Country and King,” is proclaimed in massive Arabic script on a mountainside overlooking one small town.

Discussing the king while you travel in Morocco is not a good idea. It is not allowed to criticize the king or the police. A rapper has been jailed for doing so.

One elderly man tells us how great their 56-year-old king is. He works so hard he makes himself ill, he says. He gave 50,000 tuktuks to the needy to provide them with livelihoods, he said.

But a recent BBC survey found that almost half of Moroccans surveyed want to emigrate and want immediate political change. Good jobs are gifts from politicians and the royal palace. We hear some people make remarks indicating they don’t have the connections to have a desired job.

There is huge income inequality. Minimum wage is about $300 a month.

The BBC mused that because of the disparity, Morocco could be the next site in what’s being referred to as the Arab Spring 2.0. It would follow uprisings in Algeria and Sudan last spring. We see the Latin American Spring violence occurring in Chile and Bolivia when we turn on CNN during our trip. In our travels in Egypt we heard from people who took part in the Arab Spring uprising there.

If this is coming to Morocco, we see no signs of it. But we do see the disparity. We are asked to tell our friends to please come to Morocco.

We also see nothing but kindness. A lovely young guide gives us silver necklaces with the hand of Fatima. It’s real silver, she says sweetly.

And Momo invites us to his wedding next month.

We wish we could go.

87 Replies to “Travel to Morocco: splash of color, taste of mint, kiss on the cheek”