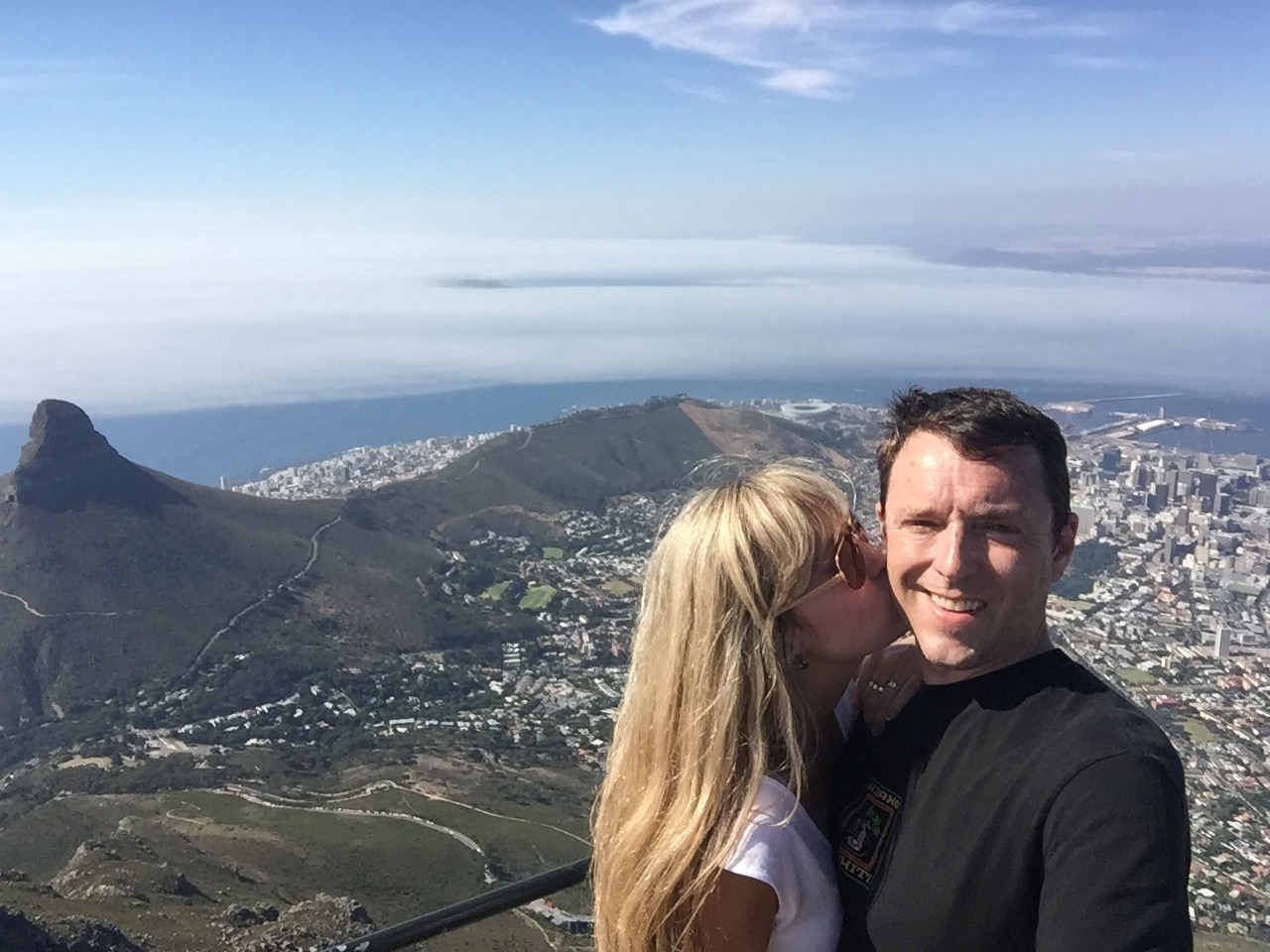 If you want an incredible anniversary experience, we have a very good suggestion: Rovos Rail.

This was our 20th wedding anniversary celebration and we wanted it to be very special.

So how does this grab you: A steam engine and rail cars perfectly restored to their pre-1940s-era splendor taking you from Zimbabwe through Botswana and ending in Durban, South Africa? Finish with a week in Cape Town and you’ve got an epic trip.

You will honestly feel like you’re a glamorous movie star from film’s golden age on Rovos. Each car on Rovos is gorgeously wood paneled and period furnished, evoking the Orient Express on the silver screen. Each meal is stunning and delicious with locally sourced ingredients and local game and served with wonderful South African wines. Each staffer is exceptional.

Our cabin took up a third of a car, with a large bed, a desk and a large bathroom with a shower, as well as a claw-footed tub. We had an included mini-bar, and returned in the evening to a bottle of champagne, roses and chocolates.

Beside the typical bathrobe and toiletries, our room came equipped with goggles, in case you wanted to stick your head out of your cabin window – which Adam did.

They take your laundry. They do your ironing. After dinner, they display various special cocktails they can make for you, in addition to anything else you might want. There are dishes of biltong jerky and chips always around.

An open-air car is at the back. Books, magazines and games – and the ever-important cigar lounge – were always available. But there are no televisions and no cell phones allowed, unless for use in taking pictures.

It all added to the feeling of glamorous travel in a bygone era.

Indeed, we met a South African pop music singing star and his wife on the second leg of our journey. There were mostly South Africans and a few Brits and Dutch couples on the journeys, and everyone gave the couple privacy.

But then we toured the Nelson Mandela Capture Site sculpture erected in 2012 to mark the 50th anniversary of his capture near Howick, South Africa. As we moved through the site, groups of young people approached the young man, asking for selfies and autographs.

The sculpture, consisting of 50 linear steel columns magically recreate Nelson’s face as you walk closer. The neighboring Apartheid Museum is also well worth the visit. This trip also becomes a tour of Mandela’s anti-apartheid journey.

There is Pretoria – where he was tried for treason and sentenced, escaped, captured, sentenced to life in prison and later inaugurated president in 1994. And there is Robben Island, where he spent 18 of his 27 years in prison and engaged in talks to end the struggle.

But regarding the mysterious young man touring sites with us, it became clear to us that he was somebody big.

One day he was sitting behind me at lunch. Being the nosy American, I tapped his shoulder and told him I’d noticed him receiving attention and asked who he was.

Danny K, he said.“I’m kind of like the Justin Timberlake of South Africa.”

The South Africans near us in the dining car, who had been trying so hard apparently up till then to act like they didn’t recognize him, started peppering him with questions: How is your new baby? Didn’t you just move to a new home? Aren’t you working on a new album? Etc.

Fortunately for him it was near the end of the trip and he and his wife didn’t seem to mind at all.

Of course, we got a picture. And he was wonderfully nice, writing us a list of a dozen restaurants to try later in Cape Town and telling us to use his name if we had trouble getting a reservation. Which we did … and it worked.

We traveled Rovos on two legs. In between, we spent two nights in the South African capitol of Pretoria where we chose to visit a wild elephant sanctuary, which we highly recommend. Workers guided us in seeing the enormous animals up close, touching them and leading them by the wet slimy interiors of their noses.

Rovos also provided multiple guided safaris in Botswana and South Africa. They were fantastic, allowing us very up-close views of a wide variety of animals. We took breaks for tea under giant treehouses surrounded by 6-foot-tall ant hills. You couldn’t help but notice the rifle the guides carried just in case.

And, can you believe that Rovos gave us gifts after each of the two legs? A bottle of South African Amarula cream liqueur, then a pair of engraved glasses, as well as a very nice box of chocolates.

After any excursion, the staff had glasses of champagne and juice waiting for us on a nice table outside the train. We sipped champagne and shopped the wooden handicrafts locals would lay out on blankets nearby.

After a night on the shore in Durban, we flew to Cape Town where we stayed in the fabulous Mount Nelson Hotel for a week.

This wasn’t a hotel room. This was an opulent apartment. We could easily have lived in the three large rooms of our suite with a view of Table Mountain. The thoughtful touches – fresh flowers and fruit delivered every day, fabulous breakfast service in the suite – brought the experience to an unbelievable level of luxury.

While we were there, Prince Harry stopped at the Mount Nelson on a visit with Archbishop Emeritus Desmond Tutu. We didn’t get to see Harry, but we walked around his black vehicles and suited security everywhere.

Cape Town boasts more than Table Mountain, one of the natural wonders of the world and a must visit. It has some of the best restaurants in the world, including The Test Kitchen, which was Danny K’s top recommendation.

Our concierge at first told us it was impossible to get reservations on short notice during our visit. Indeed, a couple we met later told us they’d made their reservation months in advance. Danny K’s referral got us in the next night.

There is plenty to keep you occupied in Cape Town, including some fun markets and shopping areas. But it’s well worth leaving the city to visit the Boulder’s Beach penguin colony and the beautiful wineries in the Stellenbosch and Paarl areas.

But we’d highly recommend you take the time to at least view by vehicle the townships, South Africa’s version of favelas or slums. We saw them from the train, and then firsthand in and around Cape Town.

One township we saw houses more than a half-million people. These racially segregated areas spoke to the ongoing struggle with the legacy of apartheid.

People who live there typically do not own the land, and build unregulated homes illegally, which often results in a lack of access to basic services such as sewerage, clean water and electricity.

It’s a ubiquitous site to see huge bundles of wires coming from the township homes and connecting illegally to substations. We’re told the government allows it.

As you pass by the small homes, sometimes the size of a small U-haul container, glimpses inside can be surprisingly, well, homey. There is comfortable furniture in some and televisions and appliances.

One friendly young taxi driver proudly told us which township he lived in. He just as proudly pointed out the opulent residences within the city.

Would that he could live in them someday.

4 Replies to “Travel in amazing Africa: transported to the golden era of train travel”