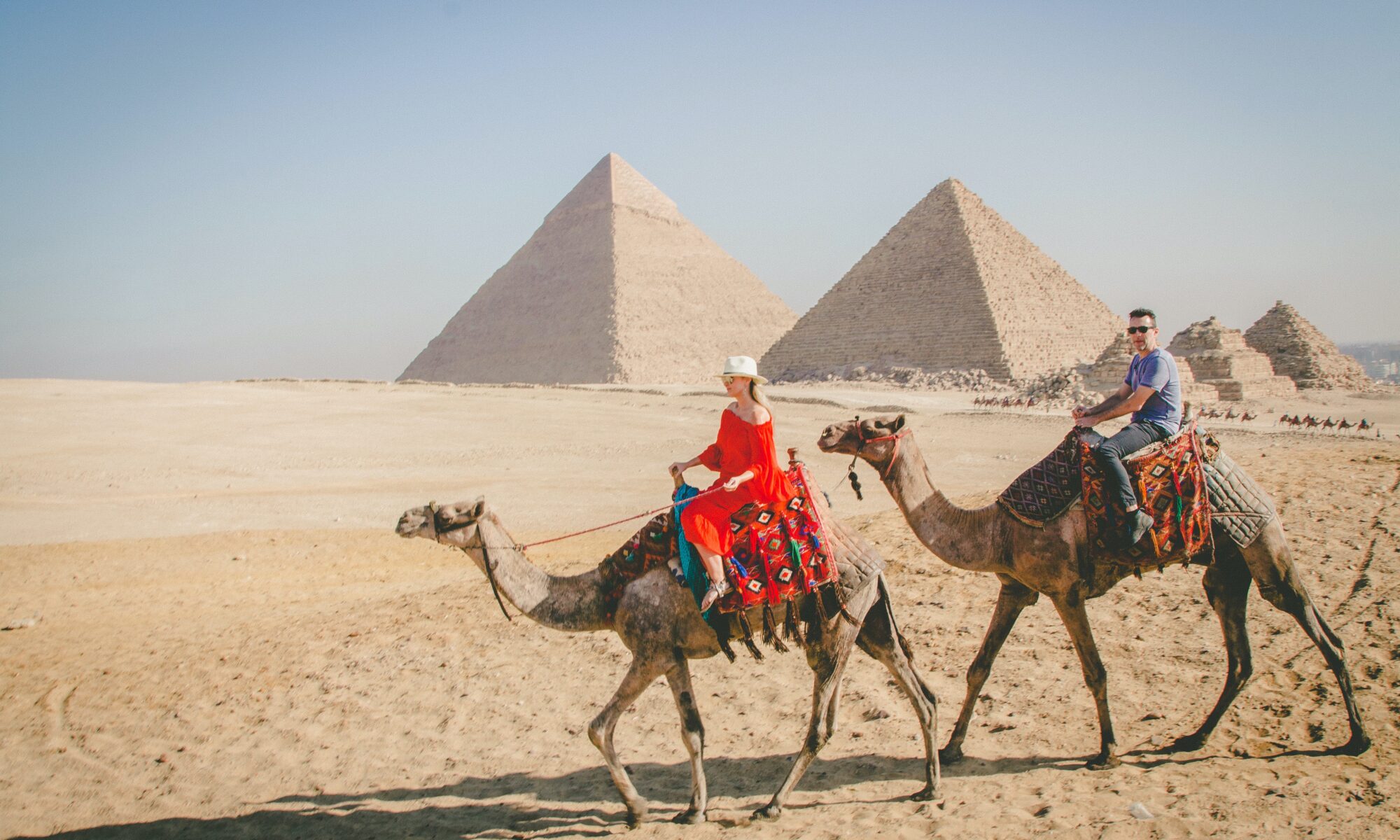 The Americans are back in Egypt – and the Egyptians are thrilled.

The Arab Spring of 2010 onward scared U.S. tourists off and it really hurt these people, who rely very heavily on tourism.

The unrest scared us off for years from experiencing this country and seeing the only remaining wonder of the ancient world, the Great Pyramid of Giza. Americans started returning in 2018, we’re told. The ones we meet are hard-core travelers like us. So it seems the less experienced travelers aren’t quite ready for Egypt travel yet.

If you’re afraid to travel to a Middle Eastern or predominantly Muslim country, traveling to one is going to make you seriously question U.S. security. We went through some of the tightest security we’ve experienced in the world. It is the same in Jordan and Lebanon, so we assume it is common in this area of the world.

Entering or exiting the airport by vehicle requires two stops for security checks and a trunk inspection.

We went through two personal security checks to exit and enter an airport. We went through three metal detectors/scanners and two full pat downs before we got access to the gates on our return.

These are very serious pat downs. Men and women are separated and a female officer felt all through my hair, my entire body, and even had me lift each leg for a double rub on each side. She ran her fingers around the inside of the band of my pants.

A guard on the other side checked through my carry-on and had me write my name and passport number.

To enter our Giza hotel, the wonderful Marriott Mena House with a balcony view of the pyramids, we passed three security checks, which also included a trunk inspection. Another metal detector/scanner was immediately inside the lobby. Every site we visited in our travel through Egypt, in Cairo and along a Nile River cruise from Luxor to Aswan, required more metal detectors/scanners.

At our hotel in Cairo, a bomb-sniffing dog circled our car before in-ground metal devices were lowered to allow us to pull up.

Egyptian men are required to serve one year in the military. There are 29 million active and reserve soldiers, according to one of our tour guides. They were stationed in combat vehicles with roof-mounted heavy machine guns at various entries, including at Aswan Dam. You are not allowed to take their photos, though the soldiers and police were very friendly if you talked to them.

In fact, people were very friendly in general. Passing by horse carriage through an early morning market in a Nubian area of Aswan, we were greeted by vendors shouting “Welcome!” and raising their arms smiling.

Like I said, they’re thrilled we’re back. Our carriage driver chatted animatedly in broken English about how happy he was to be with us. He looked stunned when Adam gave him $20 for his impromptu tour through the city.

He bubbled over then, asking us to take his picture and share it with our friends. “Tell them to come to Egypt,” he said.

A guide told us that we didn’t need to stay away in the first place. He claimed that tourists are greatly valued and we would never have been in harm’s way.

In any event, Egypt was well worth the wait.

There are not enough words to describe the majesty of the pyramids, Valley of the Kings, the spectacular temples, the precise carvings and construction. What the ancient Egyptians accomplished just simply blows your mind. The magnificent Egyptian Museum in Cairo would require weeks to take in.

The food, largely lamb and beef and vegetables, is delicious and is a major part of travel through Egypt. The Egyptians serve it with a collection of dishes: tahini, eggplant in tomato sauce, yogurt and cucumbers, couscous. They cover your table in platters and remove and replace them with a full dish before you can finish anything.

There seems to be an unspoken hosting etiquette, that no guest should be allowed to leave until they are stuffed to bursting with food. We had rice-stuffed pigeon, which we were told is a delicacy and a favorite for providing male “vigor.”

We spoke to locals about the Arab Spring as we traveled. One young man told us he spent two weeks in Tahrir Square in Cairo with tens of thousands of others shouting for freedom and the end of the 30-year reign of President Hosni Mubarak.

He told us of how Mubarak’s politicians called for the Giza horsemen and camel drivers to ride the 10 miles to Cairo to charge the protestors, like a scene out of Lawrence of Arabia.

He told us of the many people who were killed. But in the end, the clash was good because it made even more people rise up, he added.

He told us of how he ran with many others to form a human chain around the Egyptian Museum to stop those who wanted to damage it.

He didn’t need to tell us of the political chaos and unrest that has followed in Egypt and other surrounding countries. We stick with our guides and don’t wander off alone. We’re well aware that 17 tourists were injured just this May when a bomb exploded near their bus in Giza. We know that radical Islamic militants target tourists.

It’s what kept us away.

But Egyptians are continuously discovering more and more spectacular ancient artifacts. And the locals tell us that the new museum, The Grand Egyptian Museum, will be the world’s largest archeological museum and should spur even more Egypt travel in years to come.

One night we pass by it and the massive, mysterious glass edifice is awe-inspiring. It’s huge. And impressive. It’s a $1 billion dollar project, and they’re hoping to open it sometime in 2020, though it’s already behind schedule. They’re hoping it will bring back their previous numbers of tourists – and millions more.

It’s a very good reason to come back to Egypt.