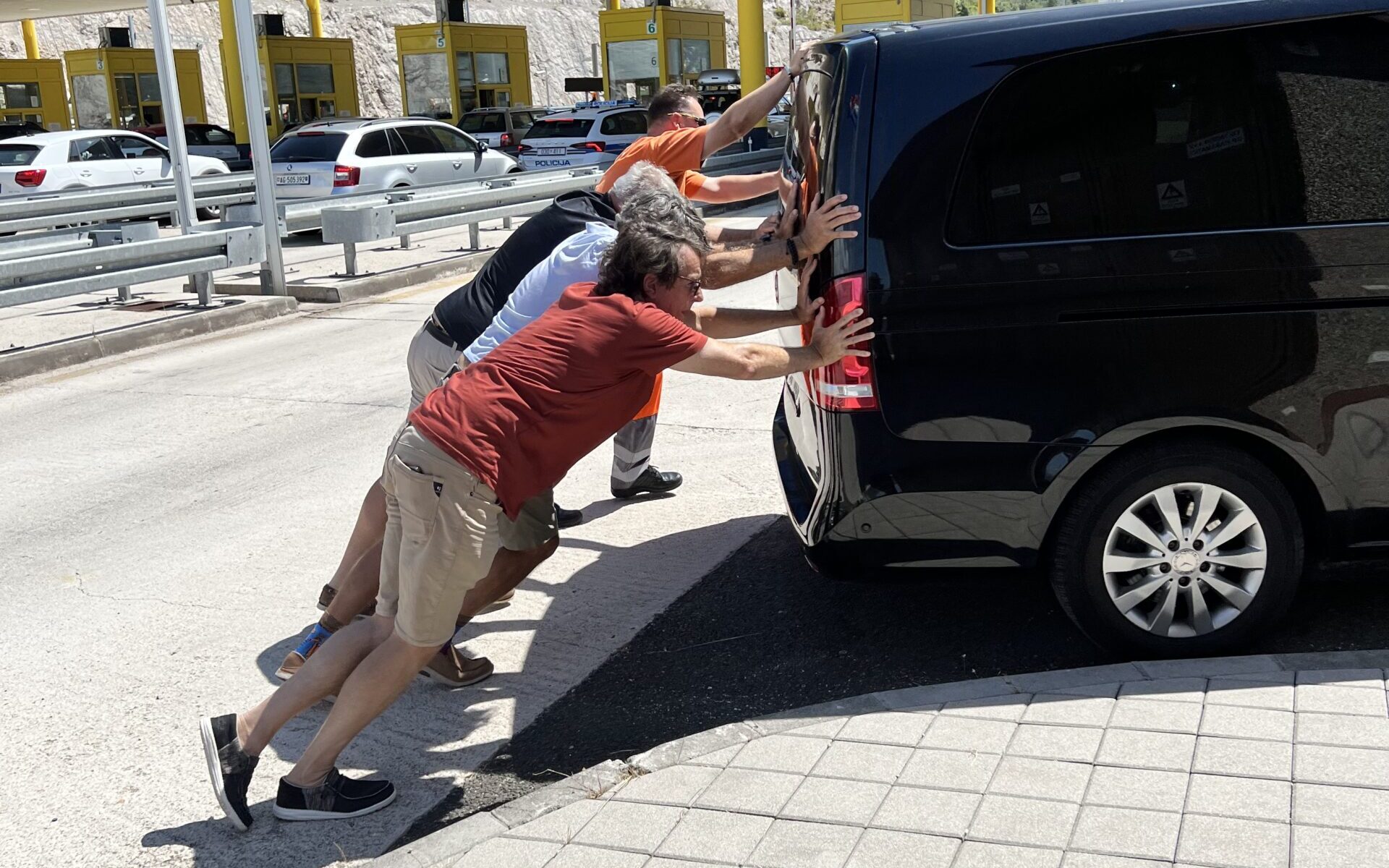 This PROBABLY could have happened anywhere, but it left us with a clear new first-order-of-business action when entering a taxi/Uber/Lyft/private car: CHECK THE GAS TANK LEVEL.

Stunning Dubrovnik, Croatia, was a can’t-miss for our friends who had never been. We made it a priority. So after deboarding our yacht north of Split, the six of us piled into a previously recommended private Mercedes van driven by a young woman.

The joke later became that it was our version of Gilligan’s “three-hour tour.”

It should have been a three-hour tour through Croatia’s spectacular mountainous inland and coastal terrain. Instead, about twoish hours in, it became a near-crash into an exit barrier as the driver mistakenly thought she saw a gas station, as she brokenly uttered to me.

I typically sit in the front seat because of motion sickness. So that was fun.

But – no – the real fun was to come. Maybe a half-hour later, (on a busy highway in the true middle of nowhere according to my later Google Maps search) we approached toll booths. The driver slowed and suddenly the van’s engine died.

At first, the driver feigned she didn’t know what was wrong. Then, she jumped out of the van – we were sitting ON a highway with a very narrow berm – and began yelling into her cell phone in Croatian. I thought to turn on the blinkers. Then, she came back to the vehicle, grabbed her purse and some other things, said she’d be back, and ran down the road.

The six of us sat stunned, I think, for several seconds trying to comprehend what was happening. Then we realized our peril, as our vehicle was just past a slight bend, not immediately visible to oncoming traffic. I had nightmare visions of all the newspaper stories involving passengers, police officers and good Samaritans killed around broken-down vehicles.

One of the guys moved back the road and started waving at traffic to get them to slow down and move into the other lane. Another of the guys found an emergency kit – under our large mound of luggage – and put out reflectors and put on reflector vests to direct traffic around us.

At some point, we figured out the gas tank was completely empty. I made a “petrol” sign on a piece of cardboard.

Nerves turned into giggles at some point, because what else could we do? The guys did look kind of funny in those vests. Those in passing vehicles seemed to think so too, as they didn’t stop to help, and instead held up their phones for god-knows-what exists on the Internet now.

Then, two of us started to wonder if this was some sort of criminal setup. Though it was broad daylight, who knew? Two of us found knives in our bags.

THEN, (I honestly don’t know how much time had passed at this point, but it seemed like an hour) a big orange garbage-truck-shaped truck pulled in behind us. Two guys in orange jumpsuits got out.

We were saved! No, we were apparently a nuisance, according to their grumpy faces. They spoke no English; they understood no hand gestures. They were apparently just peeved that we were blocking the road and motioned for us to move. We got our driver on the phone and handed her off to an orange jumpsuit. They seemed doubly peeved.

They gestured to a small turnoff a couple hundred feet away near the tollbooths and the boys got busy pushing the van. An orange jumpsuit guy kept a casual hand on the back end to “help.” One of us females in the van jumped behind the wheel to steer.  And we kept giggling. Of course, we weren’t out in the scorching heat, on the scorching blacktop.

We made it off the road, finally, had some more laughs and then the clock kept ticking. (Tip: Always have snacks and drinks on hand. Thank goodness we did. Another tip: It’s never a bad idea to have your TravelJohn Portable Urinal bags, which, very unfortunately, we did not.)

Again, it seemed like another hour, maybe more, when our driver finally showed up with two men and a large container of diesel.

Looong story short, we had five passengers who wanted to lynch our driver, and me, who for some ridiculous reason felt sorry for her. I was young and dumb once too. And, believe me, she paid for her mistake, she had to have walked quite a way and begged for rides to the nearest gas station, which according to my search was 7-9 miles away, and then begged for a ride back.

There doesn’t seem to be any sort of AAA in Croatia. Dubrovnik was, as expected, wonderful, and we could laugh about this later. But, bet your bottom, when we got into our van to the airport, we checked and double checked our gas level.