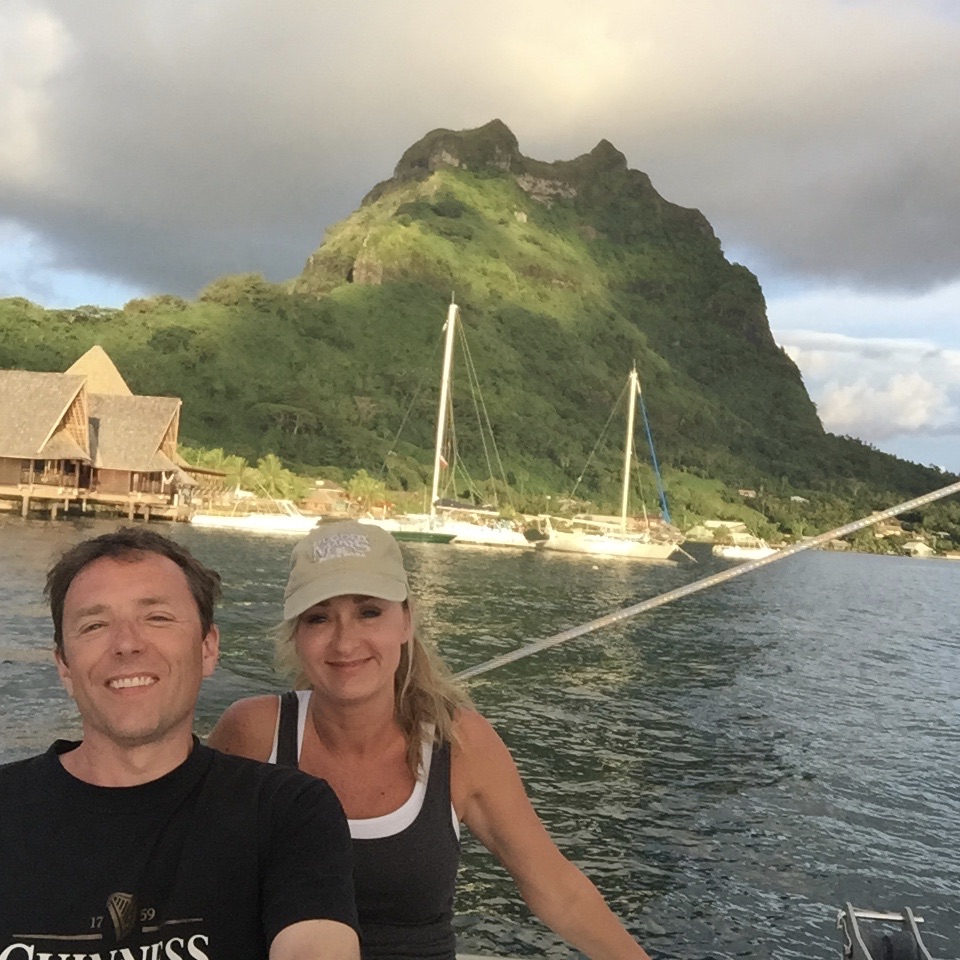 Bora Bora is one of those places that is so beautiful, you feel like you are in a movie. I don’t know which movie. Hopefully not “Jaws.”

After an all night flight from Los Angeles to French Polynesia, we chartered a beautiful catamaran yacht with four staterooms and attached bathrooms from The Moorings in Tahiti.

From there, it was seven days of the most spectacular snorkeling, breathtaking sunsets, and lazy cruising.

Well, with some interesting events mixed in, like a squall that nearly washed me overboard in the open ocean.

Our friend John was skipper of the boat and we had a great crew of friends old and new.

After overnight travel from LA and a transfer on the main island of Tahiti, we landed at the small, northernmost island of Taha’a. There, we would board our catamaran and sail north to Bora Bora.

We arrived without incident but our luggage did not. Lori’s suitcase was missing in action and we wondered how it would eventually find us, since we would be living on a moving vessel with no definite itinerary.

Bora Bora is of course the whole reason to make this lengthy trip. Many movies have taken advantage of the volcanic island’s lush greenery blanketing mountain spires overlooking the famous strings of bungalows on stilts in the crystal water.

Cruising on a yacht around this visual splendor is a wonderful experience. We stopped for supplies at little villages and loaded up on food, beer and water, and we marveled at the fortune of people who get to live in this beautiful place.

Bloody Mary’s Restaurant, Yacht Club and Bar is a must-visit for dinner, as the day’s fresh fish catch is arrayed along with steaks and other fare in a boat packed with ice. All is ready for you to pick your choices for a delicious meal. Outside signs are lined with hundreds of names of huge celebrity visitors.

It was the second day when we got a call from the boat charter: Lori’s suitcase had been located and would arrive at the airport shortly. We were in the mooring area of Bloody Mary’s and the charter folks told us to stay put, they would have the suitcase to us soon.

From our position on the water, we could see the island of Taha’a far to the south where Lori’s bag was arriving. As I studied the island through powerful binoculars on the yacht’s bridge, I saw a dot on the water in the open sea between us and the other island. As I watched, the dot resolved into the prow of a boat pointing at us, with white washes of wake to both sides.

“I bet that’s Lori’s suitcase,” I told the group. We watched this boat grow larger over the next half hour until it eventually fully resolved into two guys on an open boat with a powerful outboard.

After all the waiting, the most unusual luggage delivery in all our travels was over in seconds. I jumped down to the yacht’s swimming platform, stopped the now drifting boat with both hands as it passed in range, and accepted the suitcase from the man in the prow. I passed back a handful of money as a tip and called out “Thank you!” as the man at the motor gunned it back into gear and they looped a quick U-turn to head back to the open sea.

That same crossing would try to kill us six days later.

We’d finished almost a week of flawless cruising. We’d snorkeled among the explosion of colors that is the panorama of fish living in the reefs. We’d been swimming with docile sharks. We’d eaten our fill of endless varieties of fresh fish, fantastic Asian food and interesting local dishes. We’d whiled away a lazy, pampered afternoon in the overwater lounge of a five-star resort. We’d shopped for the island’s famous black pearls and visited a vanilla farm.

It was time to go home. Our itinerary back to reality meant we must cruise the yacht through open sea back to Taha’a, where we would return the vessel and board a small plane to Tahiti for the return flight home.

Like on every other day, the sky was beautiful, rich blue with pillowy white clouds as we set out for the open ocean crossing. The sky is a blue so surreal it looks like a special effect.

But 10 minutes into the crossing, a bruised cloud appeared to the east. It was rapidly joined by more dark brown brooding clouds, rolling in low and fat.

By the time I realized this was a squall bearing down on us, John was already firing off orders to the other passengers, telling them to get below deck and strap down anything that moved. He and I would weather the storm on deck alone.

Let’s just say the next half hour is something I will never forget.

At one point, a forward hatch was thrown open, its spring lock shattered by the violent pitching of the deck. I ran forward through the torrent to tie it down. Our passengers inside watched me through the forward window and saw me levitate a foot off the deck as I struggled to tie down the hatch. I smashed down on my ribcage and the painful resulting bruises ran the length of my torso and lasted for many weeks.

The yacht’s dingy was basically destroyed, as it whipped around in its pulley lift after breaking the stay we had secured it with.

Every other person on the boat besides John and me became violently seasick because of the massive swell and chaos of the storm.

In all, we were a disheveled wreck when we limped into the charter boat docks.

It was a hell of a way to end such a beautiful trip, but it made it very easy to leave.

2 Replies to “Travel to Tahiti: Bora Bora is like a movie … but which one?”