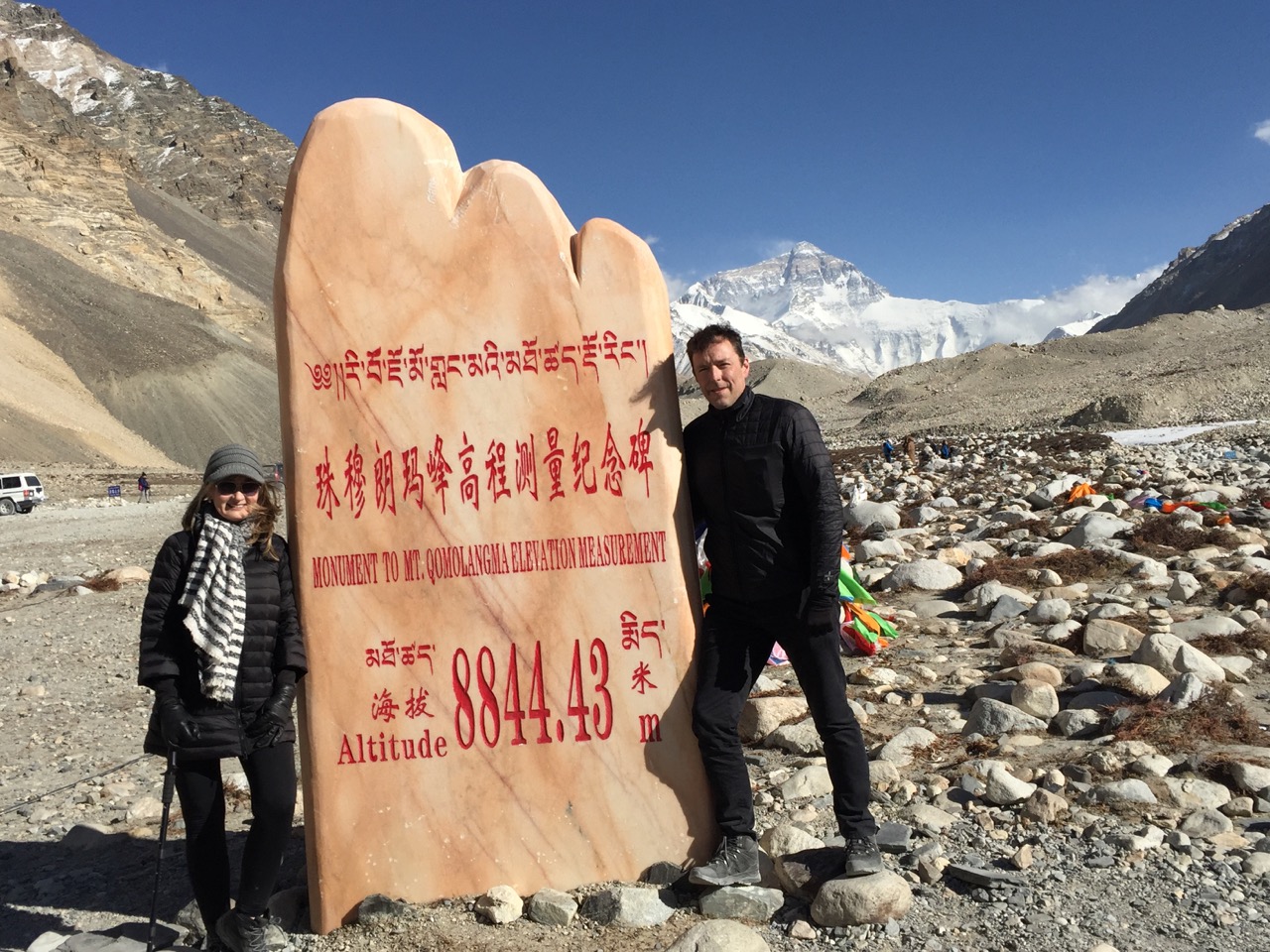 Some more tidbits from our travel to Tibet:

When a Tibetan dies, he is laid out in his home for three days.

Then the undertaker comes.

There are five kinds of burials here:

Tomb burials for the reincarnation lama/monk like the Dalai Lama

Fire burials for monks and other religious leaders

Water burials – THIS IS REAL – for children. The children’s bodies are cut up and put into sacred rivers to feed the fish. Tibetans do not eat the fish from these rivers. We pass one of the spots where they put the children in the water. It’s a serene, beautiful spot.

Sky burials — THIS IS REAL — for the common person. The vast majority of Tibetans are “buried” this way. Their bodies are taken to mountain areas, where they are chopped up on stone, and their dismembered body is taken high onto the mountain to be eaten by birds. The bones that remain are burned.

In ancient times, they also had Tree Burials, where they’d hang the body from a tree and allow it to naturally decompose and the insects and animals to eat them.

Tibetans believe in these burials because their remains are given back to nature, that their soul is gone and so the useless flesh that remains can help another living creature to survive. Plus the methods are environmentally sound. Imagine how much land we would take up if we buried all these bodies, we’re told.

I think of our endless tracts of land taken up by cemeteries and think they have a point.
But I sure can’t imagine sending a loved one off to be chopped up and eaten by birds.

It relies almost entirely on hydro-electric power. But it also has two geothermal plants, and there are solar panels and windmills throughout the countryside.

The Chinese are responsible for this as well.

I’m not even going to get into the beautiful glacier we visited and how quickly it’s shrinking due to climate change.

The Dalai Lama lives in exile in India. He is 83.

He has foretold that the next Dalai Lama will be a Tibetan refugee found living in India by oracles.

China, however, has intimated that it will choose the next Dalai Lama.

The Panchen Lama, Dalai’s second in command, was removed by the communists three days after the Dalai Lama declared him to be the reincarnated Panchen Lama.

That was more than 20 years ago and China says he is living peacefully in Beijing and wants to remain private.

China then named their own Panchen Lama.

Some worry there will be major unrest when the current Dalai Lama dies.

Oracles found him in a remote village when he was a small boy. He could identify his prayer beads and other objects from his previous life, and his mother said that from the time he could talk, he would grab a suitcase and say he was “going to Lhasa.”

The toilets on this trip:

Sky toilets – a designated area where you “go” over an outside rock.

Squat toilets – where you can have a porcelain ridged area to plant your feet while you squat over the bowl area under the floor. Squat toilets can also be literal holes in the floor, or large rectangles you could easily lose a leg to. Some are in stalls, some are in open group areas.

I can’t imagine how the elderly and disabled handle these. They’re hard for me.

Some come with a floor-level spigot, some with a bucket, some with an actual flush on the floor. There is rarely tissue, and rarely a sink.

“Natural pee” toilets – yes, in nature, with an umbrella as cover if you’re lucky.

We encountered our first squat toilet, believe it or not, many years ago in Paris. Later, traveling through Turkey and Bulgaria, we got to know how how filthy they can be.

When we encounter a regular toilet, I want to cry.

We had to get a permit to travel here. We couldn’t tell any officials upon entry to China that we planned to go on to Tibet.

You must hire a tour guide and private driver in Tibet (foreigners are required to be accompanied by them) and they make up a fake itinerary, get the visa, then get the permit, which you don’t receive until just before you go to Tibet. And there’s some anxiety practically up to the last minute that you’ll get it.

For all of China’s efforts to suppress religion, it certainly didn’t work.

Strings of prayer flags — red, white, yellow, green and blue, each color with a meaning, and each flag printed with a mantra or a prayer —are strung along mountain passes, over bridges, along streams, almost anywhere.

They believe the prayers are sent to heaven with each flutter.

The lines of prayer wheels (generally hollow metal cylinders) outside temples and monasteries are also printed with mantras and prayers, and stuffed with more handwritten prayers. Believers spin them clockwise as they walk by. Each turn is a recitation of its prayers and believed to send the messages to the heavens. Some are also turned by water and air.

The Tibetan Buddhists also display their devotion in the stacked stones you can spot almost anywhere. And in the white painted ladders you can spot on cliff sides. These remind them to always ascend to higher levels of being, aspire to better karma, and ultimately enlightenment.

Inside the temples, we see an offering like nothing we’ve seen before.

Women walk around carrying either large thermoses of melted yak butter, or vats of hardened yak butter. They pour or spoon some of it into the large candles to keep the flames burning. It smells faintly of cheese.

The yak is an important animal here. They use them to make cheese and butter tea, which is like a sweet creamy tea. They eat their meat, which tastes like buffalo to us. And they are important pack animals on Everest.

They’re also always decorated with ribbons and tassels and such and are adorable.
Also adorable, Tibetan Mastiffs, which have to be the most stately dogs we’ve ever seen.

You need no further evidence of how much I love my husband than by learning I stayed overnight in a tent at Mount Everest Base Camp to make him happy.

My water bottle froze solid next to me. The yak dung fire went out sometime around midnight. Not that it was helping much.

My head was splitting from altitude sickness — which is a very, very real thing. Many tourists make it to Lhasa and cancel their overland trip to Everest because they become sick — and the “bathroom,” three holes in a shack’s floor, was about a hundred yards away over rocky terrain. At times it is very hard to catch your breath – you feel like a gasping fish lying on a dock. And did I mention how cold it was??

But I really love my husband. And he was thrilled to be there, standing at more than 17,000 feet above sea level, at the highest ground in the world that you can get to without scaling a mountain.

That being said, it was pretty cool to be there. Mount Everest, known first in Tibetan as Chomolungma, Goddess Mother Of The World, its peak at airplane cruising altitude, is spectacular.

We had clear weather, and the stars at night are what astronauts must see in space. No star field we have ever seen can compare.

And those lunatics who summit without oxygen are just that.