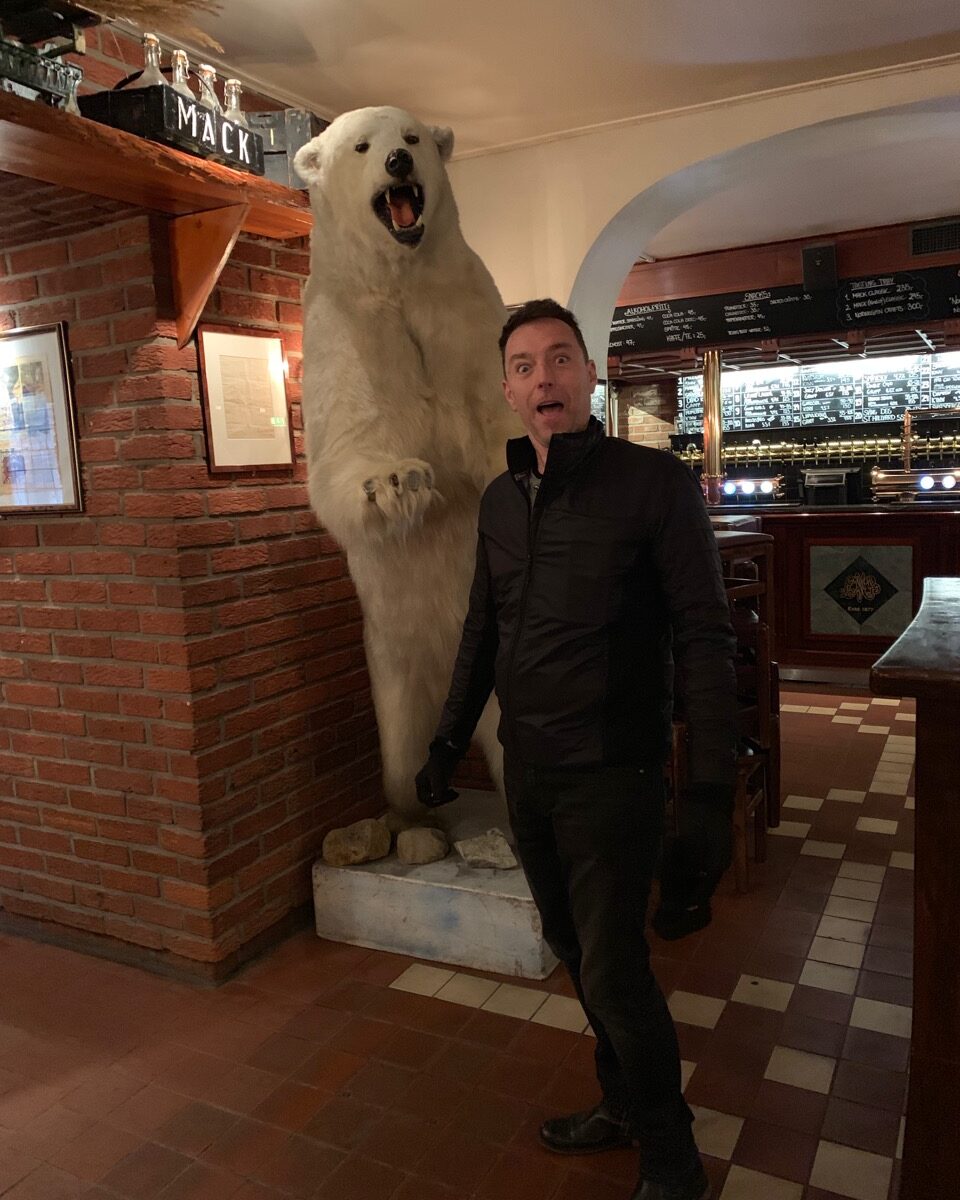 I told the bartender, “I’d like a nice cold beer.”

I guess my accent was confusing because he thought I said, “I’d like an ice cold bear.”

He immediately released the chain holding back the brewery’s resident polar bear. That’s the last thing I remember.

Actually there were pretty much no animal attacks during our visit to the Mack brewery beer hall in Tromsø, Norway.

The Mack beer hall in the brewery is a terrific spot to spend an afternoon stop-over between visiting the museums and the cable car ride to the cliff overlooking the town. Or perhaps it’s a good spot for a drink for pre- or post- Northern Lights chasing.

The beer was delicious, with something for every taste in the sampler flight that we shared. There is an overwhelming number of beers to choose from, like 70+, and trying them all sounds like a nice challenge but maybe a little much for an afternoon.

We did not do the tour of the brewing facilities and some reviewers have complained that some of the beer isn’t made in the building itself, which houses a micro-brewery, and that the bulk of Mack’s beer is made in a brewery elsewhere. That’s a little like complaining that a restaurant did not slaughter and butcher the cow for your steak in the kitchen. Who really cares?

We loved the kitschy decorations and traditional bar vibe, a warm place that is great for relaxing on a cold rainy day. The polar bear you see pictured and that I mentioned earlier didn’t kill anybody while we were there. I guess it was his day off.

The staff was very cool and friendly. We liked the beer so much that we ordered it again at a different local bar later that night.

Some reviewers on TripAdvisor are complaining that this place is touristy … so what? You’re probably there as a tourist, right?

And seriously, what do you expect when you are 200+ miles north of the Arctic Circle? If you came that far because you expect to find a nightclub from Manhattan or Rio or London, or a brewpub from Colorado, or you want to avoid a tourist spot, then you need to do better research before booking.

My advice is visit the Mack beer hall to just enjoy some great beer, sit back, relax and soak it in. And try not to be attacked by the bear.