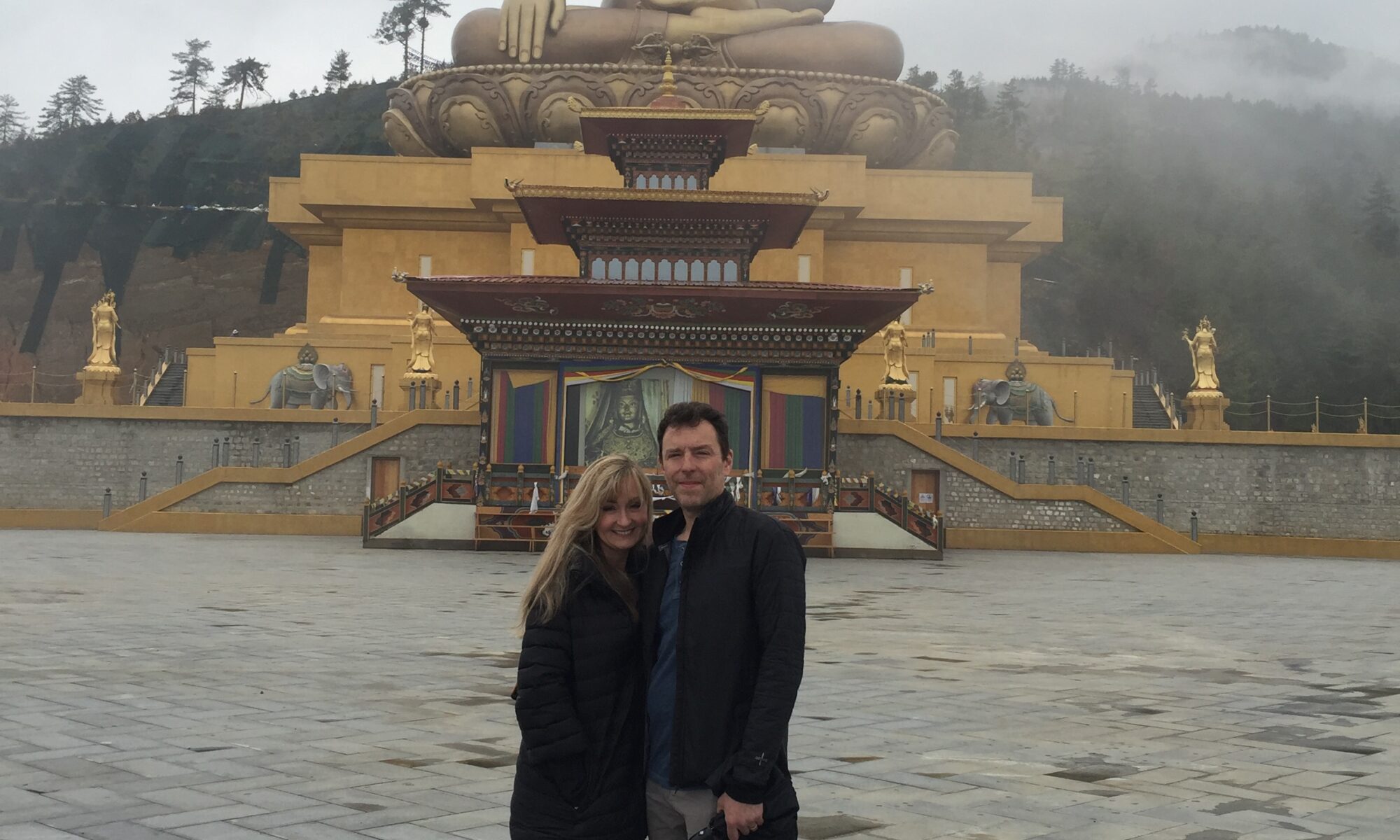 In my opinion, Bhutan is pretty much idyllic. It’s what I imagine Tibet could be. Except for the Bhutan penis art … but more on that in a minute.

Schools and universities are free.

Health care is free, even for tourists.

The sale and distribution of tobacco is forbidden.

It is entirely hydroelectric.

It has a parliamentary monarchy like Great Britain’s. The king, queen and toddler prince are all model-quality gorgeous, idolized with pictures in every home and business, along with billboards.

It has 2.9 percent unemployment and very little crime.

It has the only capital in the world with no traffic light.

It is the only country in the world to be carbon negative.

The roads are good and littering is rare.

Oh, and it measures its wealth and success by “Gross National Happiness” rather than GDP.

Most of those things I mentioned are the result of that goal. Every five years, people are randomly surveyed. They’re asked about 300 questions regarding psychological well-being, health, time use, education, culture, good governance, community vitality, ecology and living standards.

I ask people if they’re happy, and they assure me they are very happy. I’m cynical, but I’ll be damned if everyone doesn’t look happy.

And this Buddhist country means to stay that way.

Bhutan only allows 200,000 tourists into the country each year. You must obtain a visa and pay at least $250 per person per day. That includes your boarding, three meals a day (drinks are on you) and a guide and driver. And those guys keep an eye on you – in an extremely respectful and friendly way.

They are proud to show you their stunning country, which maintains its ancient architecture and dress.

We’re even here during an auspicious national holiday celebrating Bhutan’s 13 arts and crafts and cultural heritage.

I mean, they have their problems. Some guy got caught with illegal drugs, another stole from his neighbor. Some other guy got killed by an elephant.

But, honestly, after travel to China, travel to Tibet and travel to Nepal, Bhutan is serene and meditative. Oh, except for the penises.

Bhutan penis art is everywhere in certain districts. There are paintings of penises outside doorways. Penises of every size, color and material are displayed in windows and at checkout counters. Adam notices every one of them and elbows me with a Beavis and Butthead chortle.

There are all kinds of penis things for sale.

The Bhutan penis all goes back to this Buddhist monk in the 15th and 16th centuries who referred to himself as a madman. The Divine Madman, as he’s known, traveled Bhutan, drinking a lot of wine and womanizing and encouraging villagers to paint pictures of his penis on their homes as a way to ward off evil and bring good luck.

He called it the “thunderbolt of flaming wisdom.” He carried a walking stick with a penis head.

According to legend, he would hit demons with his penis. Or he cohabited with them to turn them into positive forces.

One time, the Madman was gifted a sacred string. He said he was tying it around his penis to give him luck with the ladies.

You can’t make this stuff up.

He’s also known as a fertility saint because of this, and women travel to his monastery built in 1499. There, the current lama will use the Madman’s silver phallus-tip cane or bone and wooden phalluses to hit women on the head as a blessing to have children. The women have to parade around with a very big phallus.

You really can’t make this stuff up.

But they have documentation there of all the babies produced because of the Madman’s penis.

Perhaps the Bhutan penis art leads back to the goal of happiness. It’s based in Buddhism, with its focus on compassion, contentment and calmness. Desire is the root of all evil.

I see a wooden shack, but they see a beautiful hut.

It makes you think.

12 Replies to “Beautiful Bhutan and the Madman’s Penis (Yes, Really)”