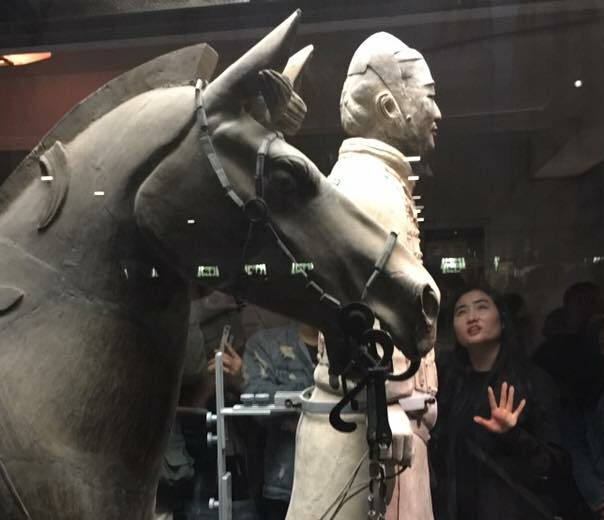 At least that’s how it looks as we wind around the outskirts of Xi’an.

Endless miles of new 35-story apartment buildings look like a giant boy bought out the giant Jenga factory and is placing the pieces on their ends toward infinity.

The Chinese buy 70-year government leases for the three-bedroom, two-bathroom modern apartments for about $100,000. Or they can rent them for much less.

They’re buying quite a lot these days. They have cars now instead of the bicycles that used to cram the roadways.

And the roadways are perfect, smooth modern thoroughfares, lined with gorgeous landscaping, each plot of free land planted with pines, blooming trees and bushes and colorful flowers. The country is clean and green. Miles of neat, beautiful farmland surround neat small block houses between cities. Many of the roads connecting them are toll roads. The people were told the tolls would end after 25 or so years, but, you know, the government lied about that. There is always maintenance or whatever.

Shuttered coal plants dot the countryside, as miles upon miles of windmills are being constructed. The Chinese plan to eventually close all coal plants and are well on their way.

BYD (Build Your Dreams) electric cars are made here in Xi’an and everyone we talk to says the company is booming. The company is the world’s largest maker of electric vehicles.

The electric vehicles are as efficient as Tesla, and they cost less than half Tesla’s price, one of our guides claims.

You can buy two and a half BYDs compared to one Tesla. But by the way, the Chinese also love Buicks. They buy quite a few.

At the same time, the government is regulating driving to improve pollution. Twenty percent of vehicles, based on their license plate numbers, aren’t allowed to be driven each day. Their drivers must take public transit, which is natural gas or electric powered, and often BYD.

The government is also planting trees like crazy, and constructing a variety of green power sources.

People talk about climate change in conversation with no mention of its validity. It’s a given.

What a difference from back home, huh?

It’s only deepened my feeling that China is overtaking us in many ways.

They talk glowingly of their president. He is working very hard for the people, they say, with no sarcasm.

The electric bullet trains are now running and will expand, 350 km/hr. They poo-poo their electric “speed” trains that only hit 310 km/hr.

Xi’an, where BYD is located, is a small village of 9 million (as the old joke goes).

Unemployment is virtually nonexistent. They want every opportunity to make money, people tell us. Yes, it’s the weekend and they’ve been working all day, but if you would like us to do more tonight, we will do it to make more money. We like money.

The Chinese are not allowed to own guns, and violent crime is rare. Knives deemed too long are confiscated. Hunting is banned, they say to conserve wildlife.

Public university costs less than $1,000 a semester. There is public and more expensive private health care. With public, you pay for what you need as you go and prices seem very low for us. Pay $25, see a hospital doctor. You need an X-ray, pay $18 and get it, etc.

Common workers get no paid vacation. They can’t own property. They can’t peaceably assemble or enjoy due process. Those who actively practice their religions are a tiny minority and the younger generations are dropping out. The government dictates how many children they can have. They can have two now.

Their media actually is fake and government controlled. Their Internet access is limited. Their social media is limited, though they use WeChat, a Facebook alternative, which is quite popular and even has a paypal-type option allowing them to not have to carry wallets any more. They only need their phones.

Walking around Tiananmen Square, the largest public square in the world, the queue around Chairman Mao’s Tomb – Mao resplendent in his glass coffin like Lenin in Russia and Ho Chi Minh in Hanoi – smack dab in the exact center, is hours long in the rain.

It’s a good opportunity for a local to make light of Trump. Trump seems to amuse them. Now Trump will also need to have the world’s biggest public square with himself eventually in the middle of it, yes?

I mean, the huge Chinese military parades go by just there between the square and the Forbidden City. So why wouldn’t he?

This will probably come up.

We see very few beggars, mostly disabled. But we notice several people sitting on a sidewalk outside a 7-11-type convenience store with a live TV on its outer wall.

The six or so men seem to be disabled, barefoot and feeble.

But there are two boys, about 7 and 8, their arms around each other, enrapt by the TV.

They break my heart. When we give them some bags of M&Ms, they are awed and thank me repeatedly in Chinese.

And I want to bring these boys home with us.