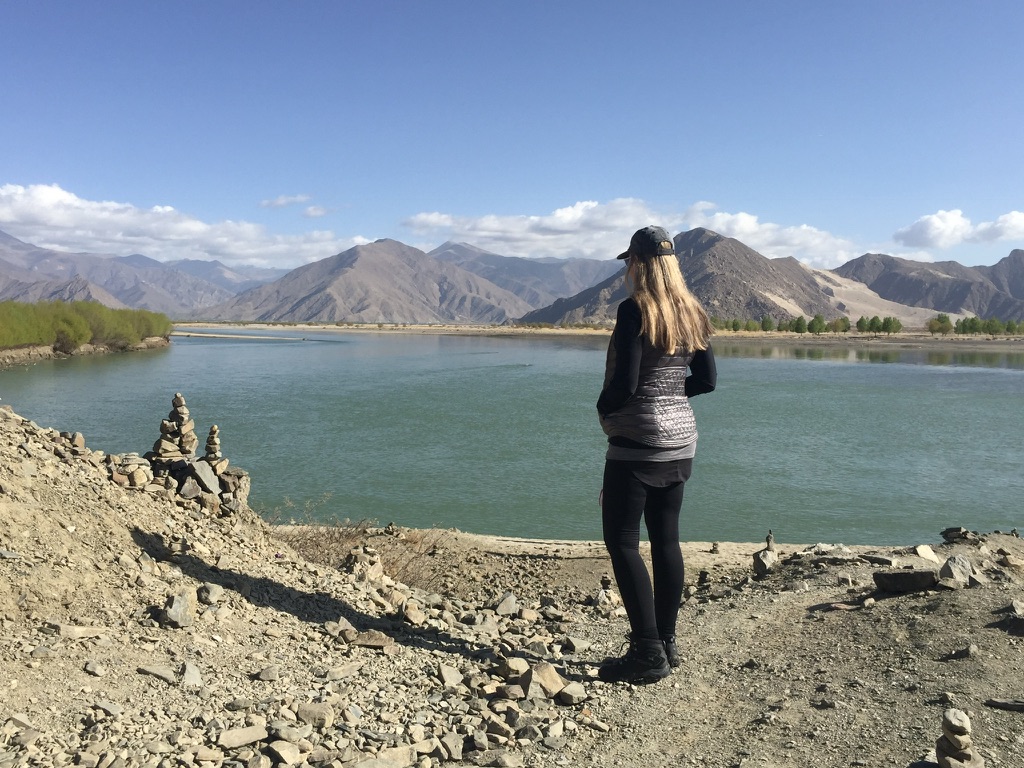 Tibet will swell your heart to bursting, then smash it in pieces.

Tibetans greet us at the airport with long, white silk scarves they tie around our necks.

These khatas symbolize purity and compassion, the basic tenant of Tibetan Buddhism.

The warmth Tibetans exude is unlike anything I’ve discovered outside my mother’s and grandmother’s love. I mean that in all sincerity.

The elderly men’s and women’s faces crease into a hundred endearing smile lines as they pat my arm and urge me to sit with them. We can’t speak to each other, but they just smile and nod and sigh and seem to invite me to just relax and enjoy our time.

Each day, locals and pilgrims walk up to three times, always clockwise, around the sacred 1,400-year-old Jokhang Temple complex in the center of capital city of Lhasa. Others prostrate themselves in reverence around the temple’s entire circumference.

Some pilgrims have prostrated themselves for hundreds of miles to reach the temple. Some use wooden blocks they clap together before sliding face first to the ground.
These people have to have abs of steel. We see a young mother teaching her adorable toddler with pigtails how to do it.

The people walk out of wrinkles in time in regional traditional dress. Long skirts, colorful threads and beads in their long braids. Some wear modern clothing, many do not.

They spin prayer wheels, sending up prayers to Buddha as they walk or sit anywhere.

They finger prayer beads, the Buddhist rosary. Any non-working time is time to pray.

Therefore, the Chinese soldiers in riot gear, carrying billy clubs and shields are truly jarring. They’re stationed two by two every several feet and shout loudly if the queue to enter the actual temple develops a gap. A brigade of them marches by every hour or so, always counterclockwise.

You do not take pictures of them! You don’t fool around with these guys. They’re scary.

China is very careful about monitoring how the outside world sees its forced occupation.

The soldiers are acutely watching for any sign or sound of unrest. It will not be tolerated. The Tibetans avoid their eyes. I can feel their resentment.

A large fire erupted in a section of Jokhang earlier this year. Tibetans wailed outside in grief, but after initial reports of the fire, the Chinese suppressed further news. We’re told no one knows the extent of damage.

The last uprising in March 2008 started with protests against further Chinese religious suppression. Monks marched peacefully, waving the white scarves and chanting “Free Tibet,” but Tibetans say it escalated when police began beating the monks and people began rioting. The riot vehicles and military arrived. The peaceful Tibetans, always at an enormous loss to combat the Chinese, threw rocks and used iron rods in response. They burned Chinese businesses.

It resulted in Tibetans’ arrests and executions and another communist wave of destruction of Tibetans’ Dalai Lama images, among many other punishments, including two months of “reeducation” for all Tibetans.

Peaceful Tibetans have been at a complete disadvantage since China invaded in 1950, when villagers briefly tried to use ancient guns and bows and arrows to stop China’s insurmountable military strength. The Dalai Lama fled disguised during the failed 1959 uprising when it was strongly suspected the Chinese planned to kill him.

Since then, there have been multiple failed uprisings, some funded by us. Hundreds of thousands, probably millions, have been killed in revolt as well as during famine blamed on the Chinese.

Perhaps the worst of China’s suppression was during its Cultural Revolution in the late ‘60s and early ‘70s. Six thousand Tibetan monasteries, sacred texts and artifacts were destroyed. Homes were ransacked and religious items and revered pictures of the Dalai Lama were taken. There were public executions and beatings as China worked to destroy the Tibetan culture entirely. Schools were taken over and children were “reeducated.” Believe it or not, the Chinese take on their occupation is that they have “liberated” the Tibetans from slavery.

Imagine our government destroying our churches, ransacking our homes for religious items and telling our children what to believe. We’d lose our collective minds.

Fifty years later, Tibetans are forbidden to talk about the cultural revolution, though they do so quietly when asked. Some liken China’s response to the 2008 riots to it. Tibetans have since tried to restore the monastery damage, but the Chinese have severely limited how many monks can belong to them.

One beautiful, ancient monastery snaking up a mountainside we visit once housed 7,000 monks. Now it is allowed 400.

China is not giving up this mineral rich country. China’s prosperity is as evident here as in China.

It’s investing like crazy in infrastructure. We travel smooth roads zig-zagging up and down mountains and connecting distant towns that were dirt roads 10 years ago. New road construction in Lhasa causes long delays.

Lhasa is now 60 percent Chinese. They are building and immigrating like crazy, taking over the business presence and capitalizing on tourism.

The days of one in four Tibetans joining the religious order, and people living simple, reverent lives are mostly gone, but clearly not forgotten.

Tibetans must show their national IDs every day if they go anywhere of any distance or enter many areas. They can’t enter Jokhang without them. There are military checkpoints, some in tents, some in buildings, throughout the countryside. You do not take pictures!

Some aren’t open 24 hours, and if you catch one that’s closed, a line forms waiting for it to open. If someone is caught without an ID, they’re jailed on suspicion of being a spy.
Deep into the countryside, we spot heavily armored military vehicles that look like warthogs, passing Tibetan farmers who are still using horses to pull their plows, and sheep and goat herders tending their flocks on foot.

Everyone must get a permit before traveling into certain regions. As punishment for the 2008 uprising, the communists no longer issue foreign travel permits to Lhasa in March.

Tibetans can’t get passports and therefore are forbidden to leave the country. But we’re told they try to sneak back and forth over the borders to Nepal and India, sometimes by bribing border guards.

There, they can watch movies like “Seven Years in Tibet” and “Kundun,” which are forbidden in Tibet. They cherish the Dalai Lama and delight in China’s anger at his escape and the glowing admiration he receives around the world.

When they ask, we tell Tibetans we’re from New York – one of the few U.S. places they recognize and because we always end up explaining Pittsburgh is “near New York” – and they reply, “Oh yes, we have many refugees there.”

As we travel through the country, we note the Chinese flags flying from every home. They’re required to fly them, we’re told, to show peaceful relations.

As we climb the magnificent seventh century Potala Palace, which was the Dalai Lama’s home, we note the new Chinese “Peaceful Liberation” monument across the road.

13 Replies to “Travel to Tibet: Warm welcome to the top of the world”