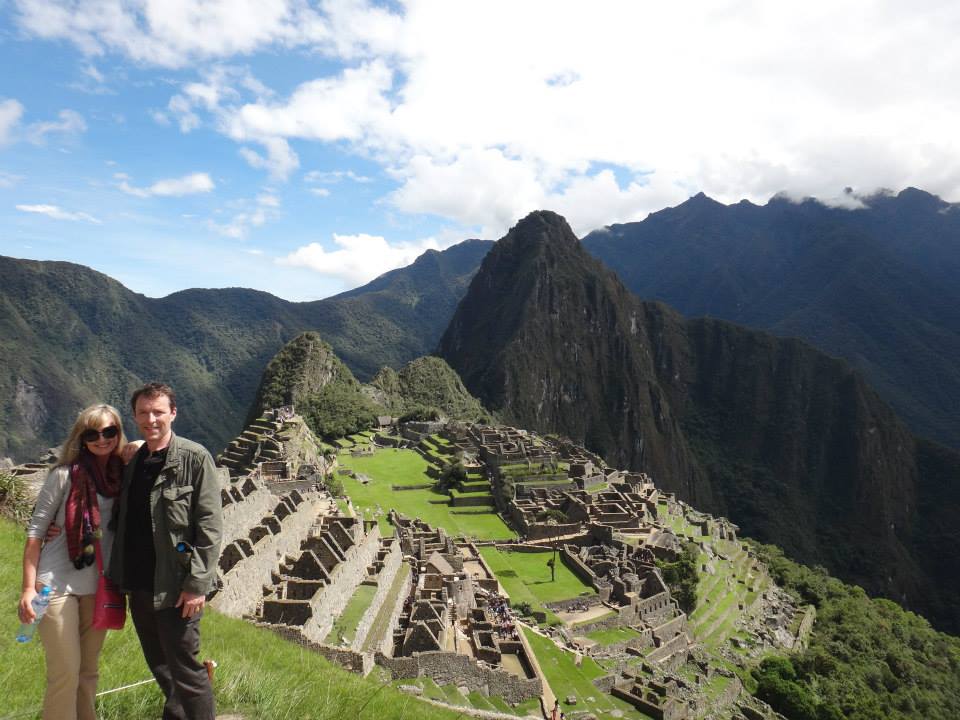 You can hike or you can take the bus from nearby Aguas Calientes to see Machu Picchu in the Peruvian Andes.

But I’d already been having shortness of breath and nausea in Cusco, which at 11,000 feet above sea level was supposed to help acclimate us for a couple of days before our train to Aguas Calientes.

As a remedy for the altitude sickness, the locals pushed on us their coca leaf tea or mate de coca, a preparation that contains a basic ingredient for cocaine, though we are assured it is not addictive. The tea is ubiquitous, and the locals also stuff it into their mouths like snuff and profess it brings a number of health benefits.

It all didn’t work so well for me. Though we were lower at nearly 8,000 feet in Machu Picchu, I still had to stop and catch my breath every couple dozen feet. There was no way in hell I was climbing the 1,200 feet up a mountainside. Adam was fine, but we’re both fit, non-smokers who hadn’t anticipated any breathing problems.

This was a minor discomfort compared to the altitude sickness I would experience a couple of years later at 18,000 feet in Tibet at the foot of Mount Everest.

Our bus climbing the cliffside road from Aguas Calientes seemed to snake upward forever. It finally let us off at an entrance where later we would enjoy a glass of wine to celebrate ticking another wonder of the world off of our travel list.

Workers at a gate stamped our passports with a special seal of the UNESCO World Heritage Site.

The place is indeed a wonder.

Hundreds of walled agricultural terraces ascend the steep mountainside. They’re engineering marvels that allowed for good drainage and soil fertility. Scientists believe the Incas even transported the rich soil from the valley for use. The terraces also protected the mountainside from erosion and landslides. They are surrounded by equally impressive construction, such as the Temple of the Sun and the Room of Three Windows, many with virtually seamless construction. The Incas didn’t use any mortar between the blocks, and also somehow made them near earthquake proof.

As you climb among the ruins, the overwhelming questions that come to mind are “Why?” and “How?”

What compelled the Incas to build this extensive complex in the 15th century in perhaps the most difficult spot imaginable? And how did they accomplish it? Simply moving these stones into place would be a major feat of engineering, let alone shaping the stones for fitting each piece seamlessly into the structures.

Most sources indicate that the Incas built the complex starting in the 1400s for one of their emperors and abandoned the site after less than a century for some mysterious reason.

We probably use the word breathtaking too much, but this place does truly take your breath away. I frequently had to stop to try to catch mine. Fortunately, there were llamas and alpacas to befriend as we went.

Adam would confidently point at one of the furry beasts and say, “Look at that alpaca.”

Adam became convinced they were actually all the same animal and the whole thing was a put on to make tourists feel stupid.

We actually watched either a baby llama or alpaca being born and take its first shaky steps just a minute later. I didn’t care which it was, it was adorable!

Back in the small hillside town of Aguas Calientes, we strolled through a local market offering handicrafts like colorful embroidered pillows, belts and alpaca blankets. We were cautioned to study the quality of the blankets because ones made from baby alpaca fur are prized and often mis-marked. Locals joke it’s “maybe alpaca” not baby alpaca.

We didn’t choose to partake in the town’s medicinal hot springs, but did follow the path upward upward upward toward them and across a narrow bridge crossing the river that divides the small town.

The only easy way to reach this place is by train; there are no easily passable roads in or out. Or you can choose from a variety of hikes, the grandaddy being the full Inca Trail, 26 miles over four days and three nights to see the sunrise over Machu Picchu. This was definitely not an option for us. Of the three Peru Rail options to the site, we chose the Vistadom, a more expensive option, but well worth it for the glass-encased cars.

We had beautiful views of the mountains and lush landscape and river the entire way while we enjoyed coffee and snacks and chatted with another couple at our table. On our return, we were entertained by a fashion show.

Every step of the way to Machu Picchu carries a fee., sometimes fairly significant ones, so plan carefully. Even the hikes are pricey. Once in country, it was overall the most expensive wonder of the world to experience. Despite this, people continue to flock here in such numbers that officials are now limiting visitors and assigning time limits.

Here are few other tidbits we found striking in Peru:

Guinea pig is a widely eaten delicacy in Peru. They call it “cuy.” Though we always make it a point to eat anything locals eat, there was no way I was going to eat something that had once been a pet. But Adam had no such reservations, sampling the guinea pig in several restaurants we visited.

He described the taste of guinea pig as “a cross between pork and hamster.”

In a few years, we’d try other “extreme foods” in Vietnam, Cambodia, China and elsewhere, like cobra infused moonshine and grilled honeycomb with bee larvae. But few were as cuddly as cuy.

The sunset from the Pacific cliffs of Lima are among the most stunning we’ve seen. We chose to see them from Barranco, where we could eat and drink at the variety of exceptional restaurants perched along the precipices overlooking the ocean.

Inca Kola, in a yellow can with a blue square logo, is called the pride of Peru. Coca-Cola owns all rights to the drink, except in Peru. It looks like Mountain Dew but tastes sort of like cream soda and not so much like the cola we drink in the States.

The Sacred Valley of the Incas, or Urubamba Valley, near Cusco is 62 miles containing many amazing Incan ruins and quaint towns like OIlantaytambo. But a modern feature really stood out to us: the Skylodge Adventure Suites, which go for about $400 a night.

The 24×8-foot glass capsules clung about 1,300 feet high on a cliffside. Each one is basically an oblong pod big enough for a couple to spend the night. You climb up to them and zip-wire down. The views have to be spectacular, and the night sky I can only imagine.

Unfortunately, I don’t think I could breath well enough to make the climb.

3 Replies to “Peru Travel: Walking in the footsteps of the Incas at Machu Picchu”