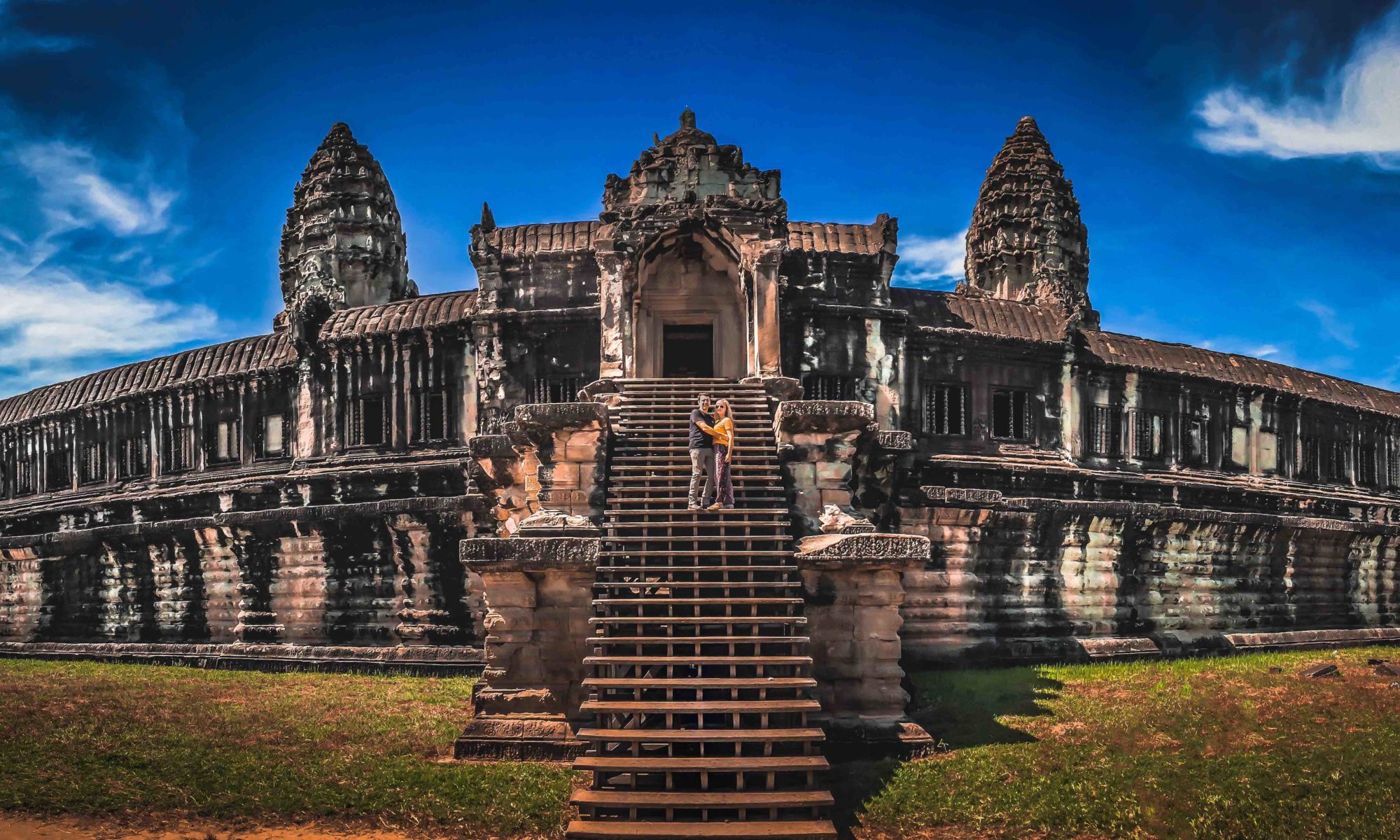 Exiting the plane into Siem Reap, Cambodia, you feel as though you were diverted to Punta Cana, Dominican Republic. It looks precisely the same: low, pointed straw roof, no gates, open walled building in the dripping humid heat. But the giant red Buddha head staring down at you once you walk inside makes you realize this is probably not a Caribbean island visit.

The long slow immigration visa line seems quite strict until you see an elderly Asian man casually nudge what looks like a $20 bill over the counter lip to an agent who previously had been making a fuss over his documents.

That made us wonder whether the stern child sex trafficking law warnings we saw later could be bypassed as easily.

Our hotel also posted a notice in our room that should we have sex with a child aged 15-18, we would do two to five in prison.

They aren’t kidding. Signs everywhere – at the airport, billboards along the street – give stern warnings in English about the prosecution of those who engage in child trafficking, which makes you regard every other foreigner you encounter with a little bit of suspicion.

This is San. She is 26 and is our guide for two entire days. She comes even after our scheduled tours end and takes us to local places she thinks we’ll like.

She orders for us and we have baked young honey bee comb, with the queen bee’s eggs still in every hole. It is spongy and slightly sweet. It’s a local delicacy. She asks what other “extreme foods” we’ve had and laughs. Adam talks about snake and guinea pig. San has never heard of guinea pig, but snake is good.

We also have fried rice, barbecued beef and beef tongue and seasoned corn that is very crunchy yet soft, and a soup-like dish we assemble: a broth, lemongrass shavings, nuts, chilis, lime, and a variety of vegetables, most of which we’ve never seen but have intense flavors.

San’s mother makes blocks of ice and San cuts it. She points to the muscles in her right arm, which are noticeable, and said she’s doing pushups every day to make up for the left arm. She mentions exercise many times.

She is bright, funny, extremely hardworking and ambitious. She has learned English very well, and studies hard. She wants to own her own guide business.

San lives with her parents, her two sisters, their two husbands and their two children – in the same house. They all support her mother.

Her mother lost both parents and several siblings during the Khmer Rouge regime. Her mother was 16 when it ended, and alone, and everyone had to be “selfish” and take care of only themselves when it ended. She had nothing.

She wound up with an abusive man, but is now doing well. It was very hard for her, San said. San, as an educated professional today, would most likely have not made it.

San doesn’t seem to want to talk about the government. It is a democracy on the outside, and communist on the inside, she says. Many people are still executed for criticizing it.

It costs us $62 for a two-day pass to see the area’s stunning temples. San said $2 goes to the children’s hospital. Another couple dollars go to something else. The rest, she shrugs.

She pointed to a roadside billboard of the king. He was a monk, but after his father died, he became king. He’s in his 60s, she marveled, isn’t he so fit? He must exercise a lot.

A Cambodian man must pay the bride’s family the equivalent of $5,000 to marry her, San told us after we encountered a bridal party at the Lady Temple. A fair amount is spent at these pre-wedding photo shoots where the couple switches to several colorful outfits with lots of different jewelry. They can travel to several of the incredible temples in the Siem Reap area for pictures and it is expensive, San says, maybe $200-$300.

I ask San about how Cambodians feel about Americans and she first says, well, they bombed us in the Vietnam War. But then she adds, then they help us with ridding the country of the million-plus landmines that still litter the country.

We see the people who’ve encountered those mines. They play music around touristy sites, their half legs wrapped.

The Cambodians have trained rats to sniff out the mines and are slowly working to remove them. But the many poor try on their own because they want to recover the valuable metal, and many are hurt or worse.

“No pain no gain,” San says as she led us around and talked about many things.

The temples and shrines are simply spectacular. Most of them a thousand years old or so, they are literally intertwined with the roots of trees rising far into the cloud-scudded sky above.

They shot scenes from Angelina Jolie’s “Tomb Raider” in one that we visited and it’s easy to see why. It’s hard to imagine a place more atmospheric with the encroaching jungle, beautifully strange stone carvings of noble faces, bold monkeys traipsing about, and oppressive, soaking heat.

The most  arresting scenes are those you see outside the city. Some villages are sprawling collections of houses built on stilts, rising above the marshy plain. Others are floating houses built on narrow skiffs. They line the edges of mangroves, tethered to branches as big around as your wrist. These villages we see are moored on a massive freshwater lake, the largest in Southeast Asia, loosely grouped around a communal houseboat, a floating billiards hall, a school, or a Catholic Church on a small barge.

The people are extremely friendly. And it seems genuine and respectful.

As you travel the roads – sometimes badly paved, then dirt and cratered – you see the roadside stands that have what our guide calls “motorbike whiskey,” or gasoline. It lines wooden stands in plastic or glass recycled bottles.

We “Ugly Americans” are no longer the bane of the traveling world. And years ago, we saw “us” in action. It WAS ugly.

The Chinese have most sincerely taken over.

Previously unable or financially restricted, the Chinese are now everywhere. The Swiss, we read, are restricting them to their own train cars.

In Southeast Asia, they’re just complaining. The Vietnamese and the Cambodians are figuring out their schedules and trying to work around the Chinese groups.

The Chinese are maybe 80 percent of the tourists we encounter. They’re rude, they’re loud, they step on you as though you aren’t there.

And, most irritating, they’re constantly hocking – three times as loud and long as I’ve ever heard – and spitting everywhere.

In the groups we encounter, the children are wild, and, ahem, large, and running amok. The elders smile indulgently at them as though they’re watching angels in action. Angels they themselves have produced.

There’s no doubt they see themselves as the new “us.” We get zero respect.

I have never – ever – in my life received so many compliments.

Everywhere we go, the women tell me how beautiful I am. I was starting to get a big head until I slowly realized that it’s not really *me,* it’s my pale skin.

The Southeast Asians value pale skin. They are all bleaching their skin, if they can. And, if they have the money, their first big birthday gift is plastic surgery to fix their “low” nose. Sunglasses slide down their low, wide noses, they complain. They want “high” noses.

We saw a young Chinese woman in one of the temples who was so pale she looked like a ghost, as though someone had put stage paint on her. In Saigon, in stifling, walking human waterfall heat, the women are wearing long sleeves, long pants, socks with sandals, hats and GLOVES to keep the sun from darkening their skin.

Dark skin, they said, is a sign of country people, poor people.

In Siem Reap, Cambodia, Adam and I had our first “four-hand” massage.

For $32 for an hour each, two women massaged each of us, four in total.

It was, oh my Buddha, the best massage ever. We will never, ever, appreciate just one person massaging us ever again. It’s just not the same as feeling as though your entire body is being massaged at once by incredibly strong and knowledgable hands.