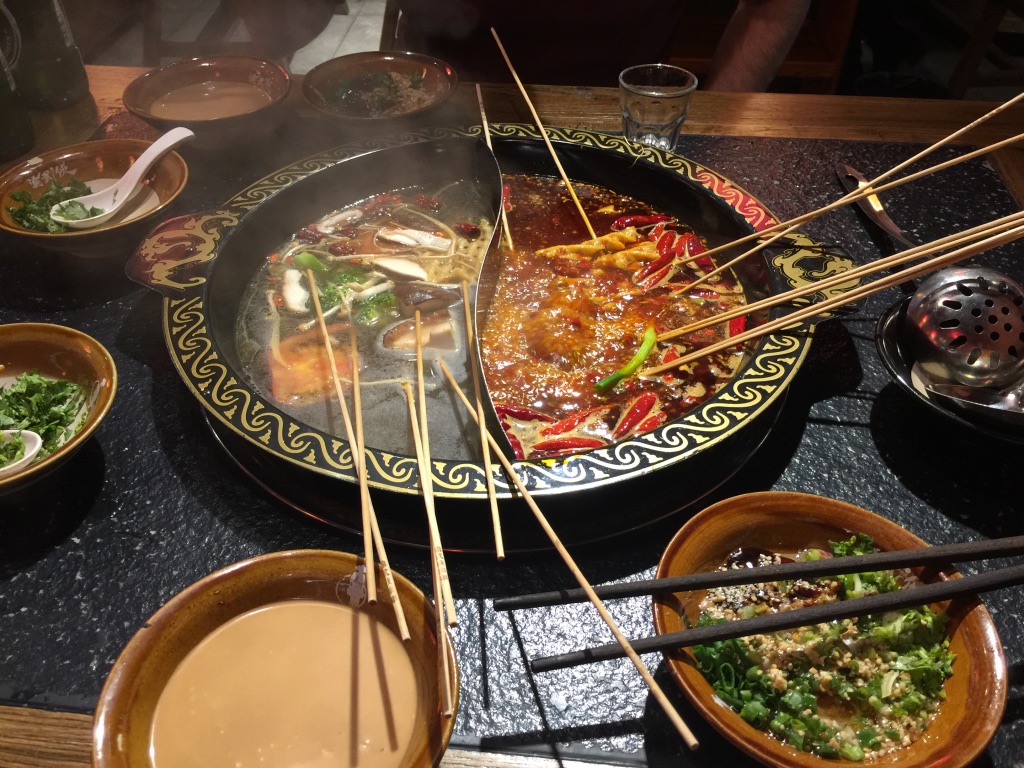 Some tidbits as we travel China:

Children are taught English starting at age 5 now. Adorable tiny children walk by, smiling at me and shyly say “hello,” and are delighted when I answer. But most adults can’t speak it, and communication is often difficult.

We use a translation app when we can. And at one restaurant we wander in to, the young staffers also whip out their phones and use their own apps, which provide confusing phrases like “You have organs?” We slooooowly figure it out.

Though China is full of delicious Chinese food restaurants – with many dishes we know from home, but much more spicy and fragrant with herbs – we were looking for something different, and found this place. We have no idea what is going on.

Turns out, after much phone wrangling, it’s a new fad. They call it “descendant of hot pot.” A traditional hot pot involves picking a broth, which is brought in a pot and placed in a cooker in the center of your table and brought to a boil. You add preselected veggies and meats. Then you eat it like a soup.

Descendant of hot pot also involves you picking a broth, but you can also get a split pot with two broths. We picked a veggie broth and one that was basically chock full of red chilis.

Then you go to a back wall where there are bins of raw things on sticks: broccoli, mushrooms, other veggies, a lot of organ meat, chicken, beef, lamb. Honestly, we don’t know what we ate. There was one choice that felt like gristle.

They count your sticks and that’s what you pay. It was $15 total, with three large beers. Adam was all the way around very happy.

I get special treatment here. I don’t know who the heck they think I am, but people often take selfies with me with and without my knowledge, some have stalked me around sites taking pictures.

I don’t notice as much as Adam does. He says it’s happening all the time. School girls get all excited. One creepy guy followed us around a temple for a long time taking pictures of us the whole time.

One man taking my photo asked me to turn toward the wind so he could get my “golden” hair blowing. Lol

Back to the not being able to own property thing, China started selling the 70-year property leases in 1980. We’re told people literally don’t know what will happen when those first leases expire. In the meantime, they can leave the remainder of leases to their children, who will have to pay taxes on them.

We wandered into an enormous grocery store. In the meat section, there were glass coolers like we see in the butcher’s section. But … there were also many tables with raw poultry and fish, spread on thin ice in the open air.

Chicken wings, chicken legs, just lined up. There were no bags around. No tongs. No help anywhere. I could not figure out what the heck people did to buy this chicken and fish. And unfortunately, I didn’t see anyone picking it out.

This is going to bug me.

We were looking for instant coffee for our mornings. Finally, we found an international section with an aisle with an American flag. Funny thing was, this aisle had nothing from America. There were English biscuits, German beer, things I’ve never seen before. A bunch of hip-looking Chinese teens were gawking at the stuff.

We did finally find some instant coffee. But the Chinese are still primarily tea drinkers. Many carry a thermos around with hot tea. They add hot water all day to the leaves in the bottom. They think only hot tea provides benefits. Cold tea does not.

Their first go-to remedy is still herbal. When we ask for pain killers because I had a pretty nasty fall on a slippery bathroom floor and it hurts like hell to walk and they can’t convince me that herbs are going to help, a pharmacist recommends a bottle of pills.

These are very, very strong, we’re told. Later, we learn they’re acetaminophen. This is when I start to really think Americans have a drug problem because this is a major disappointment.

The next day, our driver brings a remedy from home, an herbal rub, and scolds me in a grandfatherly way. So I try it, smells and feels like Bengay. Go figure.

There’s a TV station here where they watch them live. The six at the Beijing Zoo are celebrities. They are ridiculously cute. Dian Dian is very cute! Says her description.

They sleep most of the day, but in the morning, you can catch them lolling back on their butts, their fat bellies on display, stuffing themselves with bamboo.

The Chinese babies held up to the enclosures squeal with delight.

I’m not even getting into the Great Wall and the Terra Cotta Warriors. I mean, they are true world wonders. Much has been written about them.

I will say the wall is the sixth of the seven modern wonders of the world we’ve seen, and it is by far the most spectacular. We have only Petra remaining. And I have a quibble with Christ the Redeemer in Rio de Janeiro being on the list when Angkor Wat in Cambodia is so much more fantastic and is not.

I will recommend that if you go, you take the longer trip from Beijing to Jinshanling and hike a stretch of restored and original wall – and this challenging section is not overrun by tourists.

The warriors are literally history come to life before you. They’re incredible, awe inspiring. Each of the thousands unique.

The thousands of years of history on display in China, the achievements, the scale. It’s really something to see.

Chinese men will only drive a Chevrolet in an emergency. Otherwise, it’s embarrassing. They call Chevys “sanitary napkins.” I’m confused at first, then I look at the emblem again. Look at it. Get it? It’s a sanitary napkin. I’ll never see it the same again.

Anything that can be made into an acronym is. BMWs are “Buy my wife.” Fords are “Fix or repair daily.”

Adam says, well we do the same. And we do.

12 Replies to “What do they call Chinese food in China? ‘Food’ … and some other tidbits”