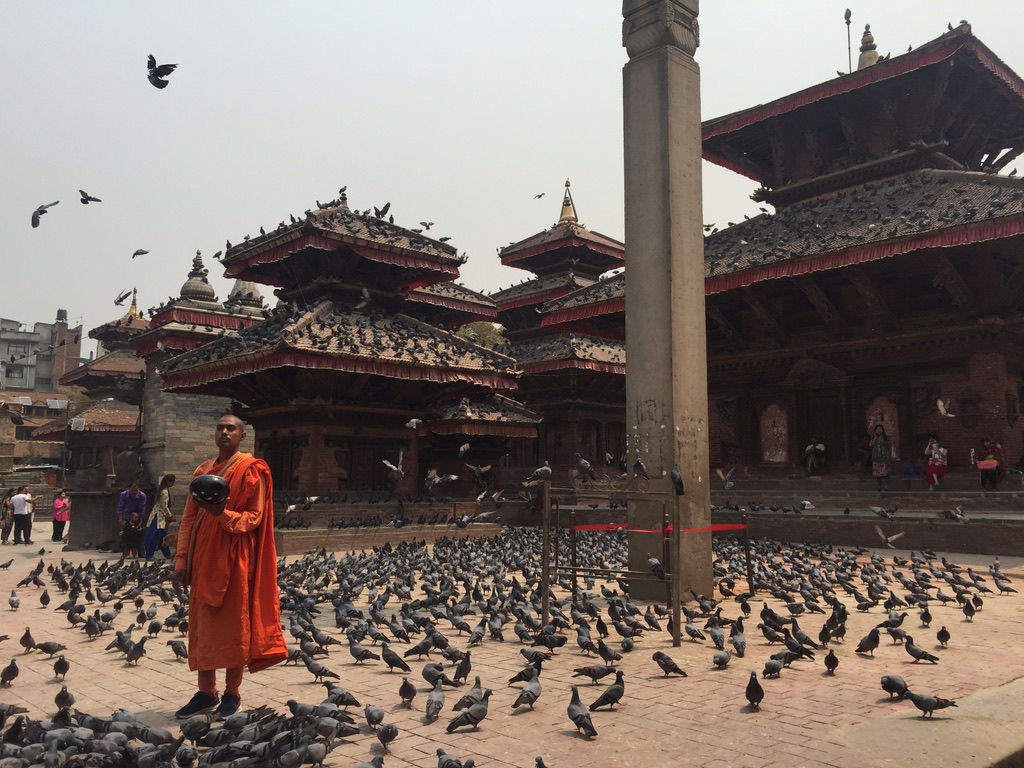 Three years after the April 2015 earthquake disaster, Nepal looks like a mountainous, tropical version of London after The Blitz. Nepal travel offers a stark reminder of how long the recovery from such a disaster can last … long after the news of the disaster has fallen out of the international headlines.

The main road from the Tibet border through the mountains to Kathmandu is still blocked. So a different road and new border crossing have been opened. It takes about eight hours to travel about 90 miles. It used to take only four hours on the previous route.

But these are not roads. These are barely cow paths. They’re filled with large rocks and holes and we bounce hard in every direction at once. I think I’m going to jar loose a kidney stone. Our guide’s head repeatedly smacks hard into the window when he falls asleep. He doesn’t seem to notice.

Add in the cows, goats, sheep and others trying to pass: buses, large trucks, motorbikes, old ladies carrying huge, heavy loads in back bags strapped around their foreheads.

The driver lays on the horn at every switchback to warn anyone coming the other way. They don’t always do the same for us.

I start to wonder how screwed we’re going to be if we wreck. They’ll only send a medical helicopter if it’s a very big wreck with multiple casualties, we’re told. And you sure don’t want to hit a cow here. It’ll get you six months to six years in jail for killing the sacred animal.

We pass three accidents. Two we can get around by a literal hair, and one road-blocker that has turned into a social gathering with loud music playing and people taking selfies. We take some selfies.

At another point, we see a little old man in an orange vest slowly picking up rocks from the roadway. He’s with the road department. No joke.

At around the six-hour mark, we finally hit the valley floor and slowly bounce toward the city. The narrow, often-dirt roads and alleys are occasionally lined with stacks of bricks and piles of sand and clay dust and rebar.

Many buildings are cracked, partially collapsed, or just rubble.

Tent villages of refugees are here and there in the city. Corrugated tin shacks are common in the mountains.

Our Nepal travel happens to land precisely on the anniversary of the 7.8-magnitude quake that killed nearly 9,000, injured about 22,000, flattened villages, destroyed centuries-old World Heritage sites.

Kathmandu was always dusty, but the dust created by all of this and kicked up by cars hangs over the valley like smog. The Nepali word for dust sounds like “doola.” They call Kathmandu “Doola-Mandu.”

We all heard the news when it happened, but I don’t think I’m alone in kind of forgetting about it and figuring they must be much better off by now.

Nope. Not even close.

In three years, Nepal has only achieved about 15 percent recovery.

In Durbar Square, where many ancient structures collapsed , the Red Cross has a canopy with info.

Inside the former palace, there is another much bigger canopy and stage set up to mark the tragedy. Another tent features a picture of a nurse who helped after the initial quake and then died in a later one. They’re having a blood drive there in her memory.

Three years. And Nepal has taken only baby steps to undo the damage.

Headlines talk about how billions of dollars in aid have been wasted on building new structures when Nepal should have been rebuilding old ones. We’re told much of the aid was also wasted in administrative costs.

People are living with family members or renting rooms when they can. They live in tents when they can’t. There is no home insurance. The government will provide a $3,000 grant to rebuild, which is enough for a two-room house. But that money comes in stages and with requirements like proving quake reinforcement and land stability.
In their in-between, the Nepalese predict how long it will be until things return to normal.

And that horrible mountain road from the border? They’re delighted with it. It’s bringing much needed tourists and commerce back into the poor country.

They need all the help they can get.

Nabu wants to publish his own books some day, but for now he is a tourist guide.
He talks about his country’s day of devastation.

He was at a book fair about to pay for his books near Kathmandu’s historic Durbar Square, which has 50 temples, some thousands of years old, within 1 km, when the first earthquake struck.

Suddenly, the world started violently shaking and the buildings started swaying. He dove under a table. It lasted 56 seconds. Afterward, he climbed out, dazed. A minute later, an even stronger quake hit and knocked him back down.

People ran in every direction, screaming. Buildings were collapsing, sending large sections of brick and rock into the narrow, crowded passages. The air was full of dust.
Many of the beautiful ancient buildings around him crumbled, burying people. He ran to help pull a nearby temple’s fallen walls off the people underneath.

“There were arms sticking up,” he said. “The faces were unrecognizable.”

Then he tried to call his family, but no calls would go through. But texting worked. Two of his sisters responded they were OK. It took five hours to hear that his parents were also OK. But his village was flattened.

One thousand and two hundred homes were destroyed there, and as of this day only 10 have been rebuilt. Three of his friends were leading treks on Everest. Only one of their bodies was found.

He doesn’t mind talking about the tragedy. But he said many people can’t talk about it.

Travel from Tibet to Nepal is almost comical, when you see the contrast between the China-controlled and Nepalese sides of the border.

It’s also a testament to the Chinese initiative, or at least the desire to make a certain impression.

The communists have built an enormous new border complex and beautiful roads leading to it since the earthquake.

But you do not take pictures! Ha, I took one from the other side.

After getting through multiple checkpoints, you exit their enormous concrete building and cross a nice bridge on foot. It’s kind of eerie. I could feel the intense armed Chinese soldiers at our backs.

The Nepalese checkpoint is in a ramshackle shack. The “road” is dirt and large stones.

The pristine Tibet is left behind for a more India-like habit of just chucking your garbage anywhere.

The Nepalese soldiers and police smile.

And they keep smiling through 12 checkpoints for the next few hours. At two, we have to remove our luggage to be searched.

The smuggling trade between the two countries is a problem.

That’s perhaps the most practical bit of advice. Nepal travel is slow travel, at least through these endless strings of checkpoints, some local, others provincial, still others national.

10 Replies to “Nepal Travel: navigating the hairpin-turn cliffs to Kathmandu”