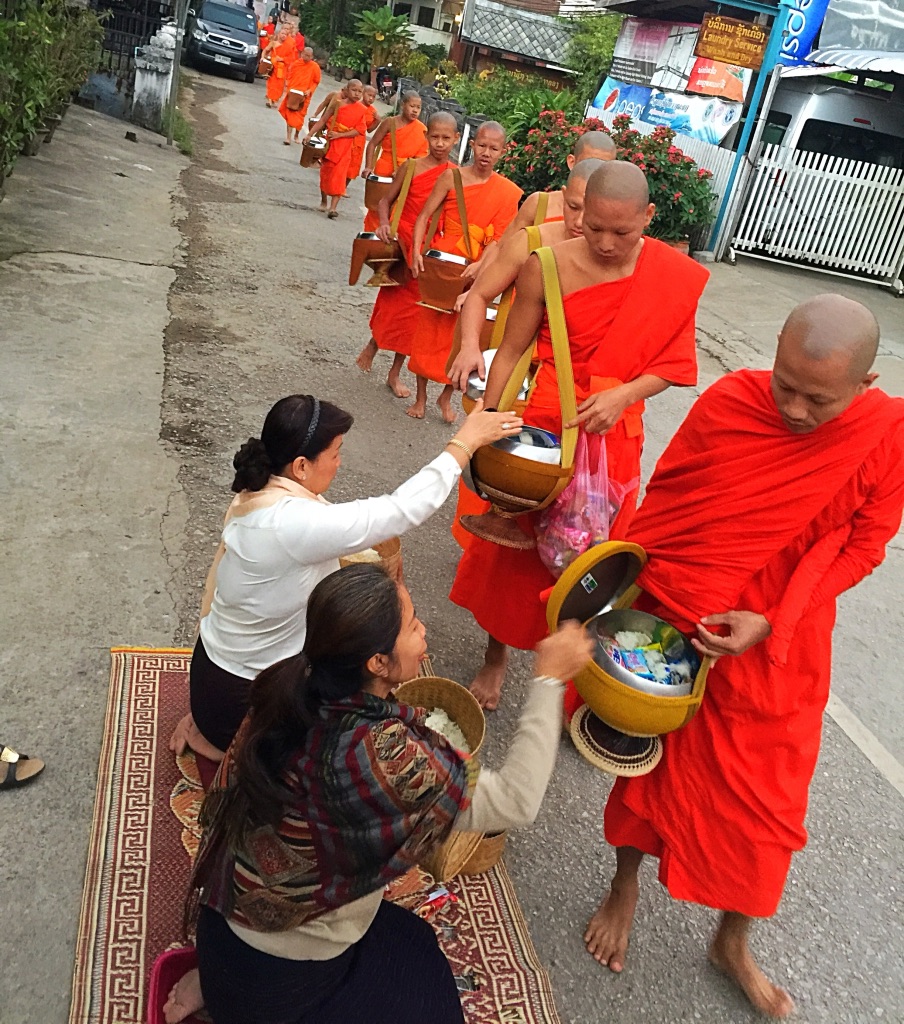 Travel to Laos if you want to see a country that has not at all been Westernized, at least in the region around Luang Prabang. All restaurants and shops are local in Luang Prabang. No buildings are taller than the highest temple. The entire town and surrounding mountains are a World Heritage site.

But the destination is on the upswing, with Laos touted as the next great travel destination for foodies and culture exploration . So don’t wait to plan your trip.

The Thai people like to vacation here because it reminds them of how Thailand used to be. The Chinese come here, well, because the Chinese go everywhere. They have by far overtaken the majority of tourists. Tourism overall is way down, especially among Westerners, and the Lao can’t explain why. I can’t either, because this is one of our favorite places.

They walk the streets of their temple’s district with their ornate lidded containers, and stop at the kneeling people who give them small pinches of sticky rice. The people are looking for blessings, and the monks are collecting their daily food. Some very poor children kneel, heads bowed and hands tented, hoping the monks will give some of their collection to them, and many do.

The monks and their apprentices are aged 10 and older. They are everywhere, cleaning the cracks in sidewalks, building, chanting. It’s somehow striking when you see some on their iPhones and iPads. “Modern Monks,” we’re told they’re called.

It seems many join to be able to eat. The city temples have no room for more, though they’re asked all the time. The poor districts’ monks often don’t get enough to eat.

They can leave “monkhood” at any time, and our guide’s brother did so, becoming a builder.

Head bowed and hands tented is the way to say thank you. It’s a sincere sign of respect.

The Lao seem to have no concern for artifacts being touched, damaged or stolen. Very little is roped off. You could reach out and touch and destroy precious 500-year-old paintings in ancient temples.

In the Cave of a Thousand Buddhas, you could easily swipe handfuls of very old carved Buddhas of every size.

But the Lao people believe that if you do, your bad karma will punish you, so they’re not worried about it.

The former king’s palace is the only area we’re not allowed to photograph. It is now a national museum.

It’s notable to us because we’ve seen many palaces around the world, and never have we seen one where the king was constantly surrounded by images reminding him of his people.

His greeting room was covered floor to ceiling in beautiful Art Deco-style paintings of ordinary people at work, at home and at play. His grand main hall’s walls were covered in similar mosaics done in mirror and colored glass.

To ascend to the throne, the king had to go to an ancient temple and was given 10 days to build a house and prove his worth. They were also beautiful.

Our guide Juu would only answer questions about the king out of earshot of anyone else.

After the forced abdication in 1975, the last king and his oldest son died in re-education camps. The rest of the family fled to Paris, where they still live.

Juu wouldn’t say this in earshot of anyone else too, but about 2,000 rebels loyal to the king who worked with the CIA still hide and live in the mountain jungles. The Lao and Vietnamese governments still search for them. But “we say, Laos is peace,” he said.

Laos Travel: up the Mekong

A couple of hours up the Mekong River from Luang Prabang is the Cave of a Thousand Buddhas.

It’s stunning. Golden and wooden Buddhas, some hundreds of years old and of every size are lined up and in every crack and cranny, stretching up into the stalactites. As in every temple, there are gifts of flowers, little towers of banana leaves topped with fringes of marigolds, which grow wild here. They also cage small birds and sell them to be set free at the temples, as a sign of good luck.

Hundreds of people hid and lived here, surrounded by these Buddhas, during the Vietnam War. The walls are stained black from their cooking fires, which they lit only at night so as not to alert the U.S. bombers.

The Americans are now helping to fund the recovery of the many landmines still in Laos.

We’ve noted other governments like the French, Germans, Australians, the Indians, help finance restoration projects of temples and historical sites throughout Southeast Asia. We saw only one temple restoration being supported by the U.S.

We learn the U.S. also supports providing soy protein to the villagers, which is vitally important. Otherwise, they are extremely malnourished. We also note the room in the king’s palace that contains the various gifts he received from other countries.
Juu is very excited to show us the gifts from the Americans.

“These are very special,” he said. They are tiny fragments of moon rocks from our first lunar landing, gifted from Nixon in 1973 after the administration signed the peace accord.

Monks and the exquisite temples are around every corner. Naga, snakes with dragon heads cover the railings leading to each entry. Seven-headed naga indicated royalty. Each area and each village builds one. We learn Buddhism has denominations similar to Christianity. They have wonderful lessons, typically involving demons and dragons, talking animals who teach the children how to share and how to be good people. Buddhism, Juu said, is about being a good person so that your next life will be better.

We’re amused in Luang Prabang with a little pug with a bell who seemed to be the man about town.

We saw his laughing owner repeatedly carrying him out of various shops and restaurants he’d got to on his own. Or he’d be in the middle of the street trying to hump much bigger dogs.

The Lao say the Vietnamese often come into their country and steal their dogs for food. They feed them antifreeze and then cut off their heads, or, if the dog is dodgy, they rope it, tie it to a vehicle and drag it until it is exhausted, then cut off its head.

Juu is educated. He presented his research at Concordia. His work examined the older women who come to Laos to find younger men for “romantic.” Some marry, some are successful. One approaches him while we’re with him. He’s amused.

Cock fighting is popular everywhere. They keep the roosters in bamboo cages, similar to what we use to cover picnic food.

Throughout our travels through these poor, developing countries, we’ve encountered the nicest, most hardworking people. They’re kind – one girl in Hanoi’s crazy old quarter chased us a block to give me my iPhone that had fallen out of my pocket; a man chased us two blocks to return bags we’d left behind in a restaurant in Luang Prabang; everywhere, they corrected us when we gave them too much money; and tips were received with many bows as though we’d handed them gold.

Even in the poorest villages, where women work hard making paper, hand embroidering and sewing, spinning silk or trying to sell food while their men are working outside, they’re so happy to see you and show you what they’re doing whether you’re buying or not. They’re never pushy. If they do venture to ask if you’re interested in buying and you say no, they immediately sit back.

It seems they are just happy to be seen.

29 Replies to “Travel to Lovely Laos: Not yet tainted by tourists”